The world has changed dramatically since last fall, but UP hasn’t forgotten Owen Klinger

A group of over 40 people gathered for a memorial Mass in memory of Owen Klinger on the one year anniversary of his death.

The University of Portland campus, which has been near desolate since the beginning of the pandemic, saw a spark of life last night as friends, neighbors, former residents of Christie Hall and family members gathered to remember the life of Owen Klinger.

Oct. 20 marked the one year anniversary of Klinger’s death. Two weeks after being reported missing, Klinger’s body was found in the Willamette River. Klinger would have turned 19 this July. It was a tragic year for Klinger’s family, and although they have remained positive, the loss has had lasting impacts.

“One year after losing our son Owen, we are still wrecked and ravaged by waves of unpredictable grief,” Mary and Dustin Klinger, Owen’s parents, wrote in their statement to UP. “We know that we are lucky to have the support of friends, family, and community, but it is still incredibly difficult to move through our days without his joyful energy in the middle of all of our family togetherness.”

A socially distant memorial Mass was held last night in the Chapel of Christ the Teacher, and streamed live on YouTube for those who couldn’t make it in person. More than 40 people attended the Mass in person, and over 90 tuned into the livestream.

After the Mass, the group walked from the chapel to Klinger’s memorial next to Christie Hall for a candlelit vigil. All those in attendance were invited to share memories and stories about Klinger.

Despite the somber atmosphere, laughs and masked smiles filled the space around the Japanese Maple, planted in his memory. Heart shaped rocks were set at Klinger’s memorial for those who wanted to take them home.

The event was largely organized by Associate Professor of Psychological Sciences Sarina Saturn, Fr. James Gallagher and Klinger’s family. It aimed not only to mourn the loss of a friend, brother and son, but to remember all the joy he brought to those who knew him.

“We are awed by people who have shared with us that knowing Owen – or learning about him after his death – has somehow enriched their lives,” the statement said. “Please continue to reach out to us or to anyone that you know who is grieving. All of these connections are important and so desperately needed by many right now.”

The Klinger family still has questions as to what happened last fall, and encourages anyone with more information about Klinger’s disappearance to reach out to them.

Klinger’s family established the Owen Klinger ‘23 Scholarship Fund in his memory, but the pandemic delayed its disbursement this year. Dustin Klinger hopes that it will be active in time for the next academic year.

The Klinger’s also invite the community to engage in the More Owen 2020 Acts of Kindness campaign.

“We invite you to do something helpful or kind for someone else (or just do one of your own chores with a more Owen-like attitude) and share with us at moreowen2020@gmail.com or using the hashtag #moreowen,” the statement said. 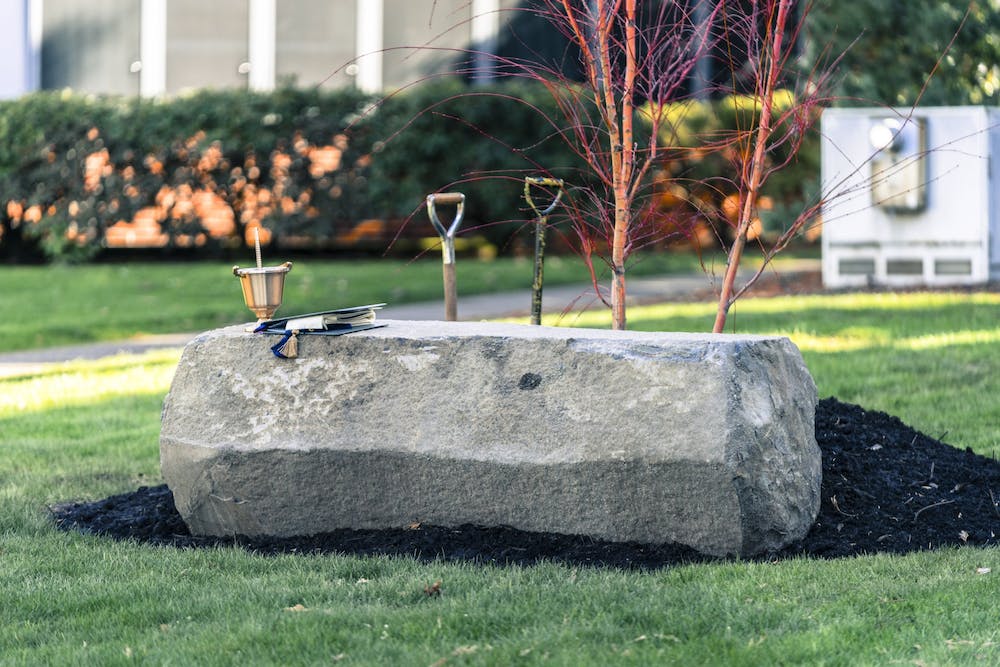 Owen Klinger honored with new memorial next to Christie Hall