Do the thing in front of you

University of Portland students working with Habitat for Humanity through the Moreau Center for Service and Leadership.

Recent protests in Egypt, Tunisia, Yemen, Bahrain, Jordan and Libya have highlighted two realities: Many people on this earth live under crushing political repression and poverty, and even under such conditions people somehow manage to survive and even push for improvement. On televisions and websites, and in newspapers and magazines, the world has seen remarkable scenes of courageous protest. We have also seen despots use police and soldiers and goon squads to violently suppress the demonstrators. Throughout these events, and despite the complicated histories and political landscapes of these countries, my heart and mind have repeated one simple question: Will these people achieve greater justice? That simple question provokes a kind of echo - What can I do to promote justice?

Mother Teresa of Calcutta dedicated her life to serving the sick, the dying, and the poorest of the poor. When former U.S. Ambassador Tony Hall visited Calcutta's slums in the early 80's with Mother Teresa, he was overcome with the number of destitute people and asked, "What can I do?" Mother Teresa answered, "Do the thing in front of you."

Through the Moreau Center for Service and Leadership, UP students have many opportunities to directly serve people in need, to learn about Catholic social teaching and social justice, and to "do the thing in front of you." Some of our students, faculty and staff get to travel to Nicaragua, Alaska, Tucson, and East Africa to do good work and learn about social justice issues in those far places, but more of our students travel to decidedly un-exotic places, tutoring kids in St. Johns and University Park, biking or busing downtown to serve homeless people at the Blanchet House, walking to the St. Mary's Lounge on a Saturday to enjoy time with people with disabilities, going to Yakima, Wash. to do service and learn more about agricultural and farm worker issues, and packing into vans to teach English to migrant farm workers in Hillsboro, Ore. There are many people in need all over the world, including Portland. And students can get involved right here in Portland to promote justice all over the world. In other words, you have the chance to do the thing that is in front of you.

Charles Lewis, '94, founder and executive director of Ethos Music Center, gave the keynote address at our recent Moreau Center brunch. He talked about how his experiences of engaging in service while at UP and later as a Peace Corps volunteer in Congo grounded him, highlighted his own gifts, and fed his desire to do good work. Experiences like the Urban and Rural plunges will give, Charles noted, "flashes of inspiration you can use to direct your efforts to serve humanity and to do God's work here on earth." Charles began Ethos after drastic budget cuts wiped out music education in many Portland public schools, especially schools in poorer and underserved neighborhoods.

Most of us at UP enjoy relatively tranquil and comfortable lives, far from the political turmoil of northern Africa, far from the lives of people who are homeless, far from the struggles of the migrant farm workers who pick our crops. But if you want your life to really mean something, I suggest you ask yourself two questions: What is right in front of me, and what can I do to promote justice?

Pat Ell is the Assistant Director for the Moreau Center for Service and Leadership. He can be reached at ell@up.edu 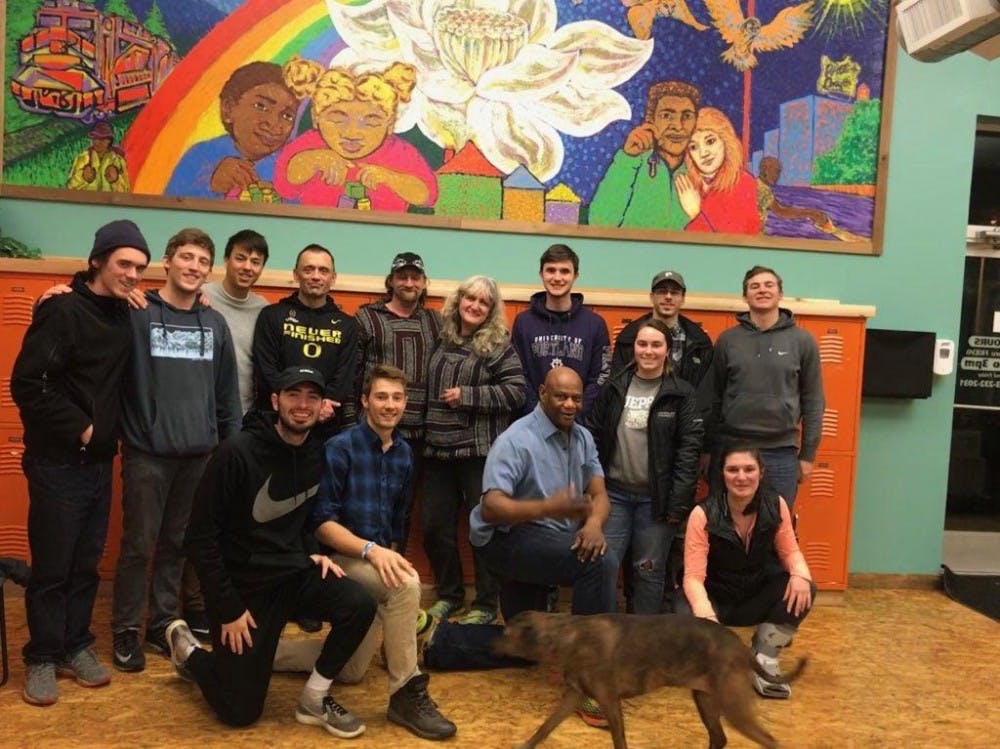 University FOR Portland combats homelessness by breaking “The Bluff bubble”