Taryn Ries puts on her game face before moving into position to try for a goal.
by Molly Lowney / The Beacon

The Pilots had made it to double overtime, tied 1-1 against the San Francisco Dons. Portland drives the ball to the opponent’s side, keeping possession while fighting their own exhaustion. In the 103rd minute, the ball is crossed to the top of the goalie box. Junior forward Taryn Ries jumps up and heads the ball right through the San Francisco keeper’s hands.

Immediately, she turns around, arms spread wide, ready to embrace her teammates who come rushing toward her. The rest of the team comes running from the sidelines to lovingly pile on top of her in celebration of their win.

This has quickly become a common scene for University of Portland women’s soccer: Ries scores, runs to her teammates, jumping to hug them and yell in excitement, and the crowd goes wild. On the field, she’s exuberant, fast, aggressive and full of contagious energy that gets both fans and her teammates cheering on their feet.

But off the field, she’s calm, soft-spoken, and ready to attribute Portland’s recent success to her teammates and coaches.

“She wants the best for everyone,” said junior Olivia Dendinger, a teammate and close friend of Ries. “She wants to put everyone in a position to do their best and is very unselfish.”

Ries’ contribution to the UP women’s soccer program is undeniable. In the past two seasons, Ries has become a key player on Portland’s roster, leading the team in goals, winning conference awards, gaining national recognition and meeting records that the program hasn’t seen since the previous decade. The junior has quickly become a driving force in the Pilot’s road back to former glory.

Ries’ sudden rise to collegiate soccer stardom began her sophomore year. She started all 20 games her second season as a Pilot, scoring 15 times, which had her ranked seventh nationally in goals and was more than the team had scored all together the previous year under former head coach Garrett Smith. Ries was also ranked seventh in game-winners with six in the 2018 campaign. She had two of the three hat tricks by a West Coast Conference player that season, making her the first Pilot to do this since 2009.

But before breaking records and turning heads, Ries grew up in Ridgefield, Washington, with her parents and older brother. Since she had always been an active child, her parents decided to sign her up for multiple sports, including softball, basketball and track. Immediately, she gravitated more toward team sports, particularly soccer. Her talent was obvious from the start.

“I have had people telling me — coaches in particular — telling me from a very young age that she’s special, and she has special gifts,” said Ries’ mom, Kathy Ries.

She shared that at 6 years old, Ries was playing in a game with a youth soccer league, scoring goal after goal, when her coach called out to her to ask that she pass to other kids. The young Ries promptly stopped in her tracks, looked over to her coach and said, “If they would get open, I would pass the ball.”

This mark of leadership and accountability would follow her up through high school to UP. In high school, Ries decided to dedicate her time to soccer over other sports, joining FC Portland under coach Garrett Smith with fellow Portland teammate and friend Dendinger.

The connection with Smith offered a way onto The Bluff for collegiate soccer. However, what drew Ries to UP was more than just her connection — it was the legend surrounding Portland soccer. Athletes she had looked up to, Megan Rapinoe and Christine Sinclair, were local idols to her and former Pilots. That, and the notorious fan base with the Villa Maria Drum Squad at the lead, were enough to persuade Ries to play for UP.

“Growing up around here, I just really enjoyed the culture and the history of the school with all the cool players,” Ries said. “And obviously, living in Portland and having the Portland Thorns have one of the biggest stadiums and get so many fans — I think that’s just really cool, being able to be right there.”

However, as she approached her first year at UP, Ries was deterred by a torn ACL her senior year of high school. Luckily, Ries was able to recover from the injury enough for her freshman year. But for a moment, she thought it might be the end of her soccer career.

“It definitely crossed my mind, but I try not to think about it as much as possible — just kind of focus on how far I’ve come,” Ries said.

Her freshman year didn’t see the kinds of numbers as her sophomore year because the injury had meant less playing time and more caution as she entered her first season as a Pilot.

But her injury wasn’t the only obstacle Ries had to overcome her freshman year. After a losing first season at UP with an overall record of 5-13-1, her former club coach and Portland head coach Smith left the program. Athletics brought on head coach Michelle French along with other new staff members, and Ries was faced with a restructure of the team dynamic, and the uncertainty of her own role on the field.

The change in staff, however, along with encouragement from French and more opportunities to play gave Ries the space to show what she can do.

“Overall, they’ve helped change the team culture and put us on a better path to kind of getting Portland back on the map,” Ries said. “I just think it’s a much better environment and everyone’s much more motivated. And we’re all kind of working together for the same goal — versus before, it was kind of all over the place.”

Ries looks to her mom as a model to follow for perseverance, strength and patience. When Ries was little, her mom battled uterine cancer. She was inspired by seeing her mom overcome the illness while still being present with never-wavering support in Ries’ day-to-day rush of activities.

“She’s just really strong, and so I just want to be like her. And she’s very patient ... She’s just always cool and calm,” Ries said of her mom. “I think seeing her get through that was very inspiring.”

Her mom’s strength to keep moving translated to Ries. This drive has translated on the field, as Ries worked through her freshman year to become a leader by example and one of the best players on the team.

This year, Ries continued leading her team on the field. While she may not have scored as much as the previous season with a total of eight goals, Ries has proved her versatility as a player as she moved from center to outside forward. The slight shift in position allowed her to take on a supporting role for her teammates, creating plays, producing four assists and wrapping up the season on the All-West Coast Conference Women’s Soccer First Team.

“She’s kind of had to hone her skills in wider areas, whether that’s taking players on, getting a cross off, cutting inside to get a finish, whatever the case is,” French said. “So, I think she’s really developed into more of a complete player.”

While Ries’ skills keep impressing spectators, her role as a teammate is just as impressive. Both her family and her fellow Pilots describe Ries’ leadership as holding people accountable — she wants people to give it their all.

“(She’s) always demanding a lot of herself and others around her, expecting them to give their best,” Kathy Ries said. “She always expected people to do the best they could.”

As a teammate, she supports and motivates. As a friend, she shows up. Dendinger and Ries have been friends since high school and were roommates in Lund Family Hall when they came to UP. While the memories they’ve made together playing soccer are countless, the ones that stand out are the late nights they stayed up talking in their room freshman year.

“Being there for each other on the good and bad days are probably the best moments we’ve had together,” Dendinger said.

Now as a junior, Ries looks to her older teammates for guidance on what her next step will be after UP. She’s currently studying psychology but is more interested in a possible career in nutrition. First, though, Ries wants to see if she can play professionally after college. As some of her teammates graduate this December and contemplate entering the draft in February, Ries hopes to learn from their process to see whether that’s something she’d like to do. If not domestic play, then she would look to play internationally as other Pilots have done in the past.

But Ries doesn’t have to make a decision yet, and UP is happy to have her for at least one more season. And in whatever she decides to do, her friends and family expect nothing less than the energy she shows on the field, the excitement she shares with her teammates, the resilience she learned growing up and the same leadership she showed at just 6-years-old.

“What I really hope for more than anything is that she’s able to do what she wants to do, and if that involves moving on with soccer, it’s all I can hope for,” Kathy said. “And to the degree that it’s in her control, she will make it happen.”

Ana Clyde is the copy editor and senior sports reporter for The Beacon. She can be reached at clyde20@up.edu. 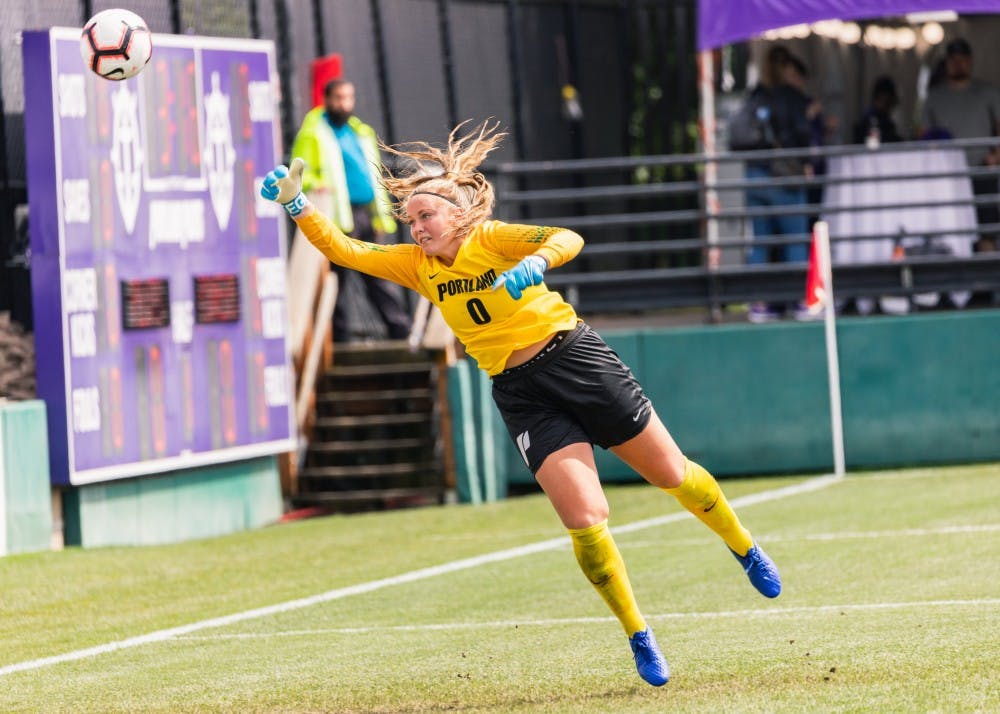 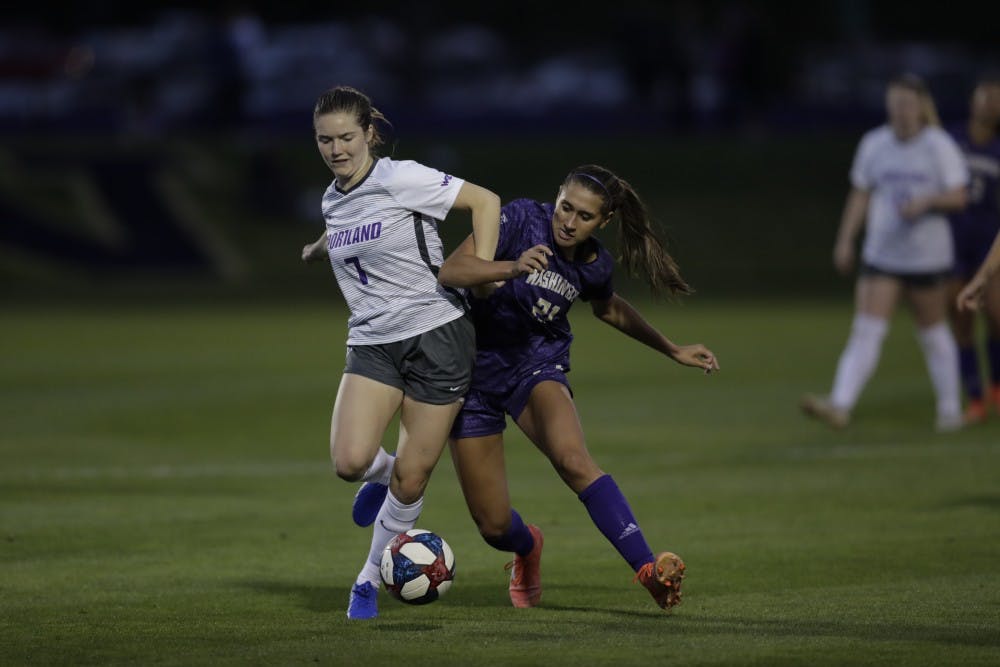