UP's Clark library has now added past editions of The Beacon to its online archives. These Beacon editions can be found on Clark Library's digital collection site.

Nothing is forever, and that includes paper. As decades old student newspapers yellow and become frail, they become harder and harder to flip through. In order to preserve a history unique to the University of Portland, library faculty members took on the project of digitizing the entirety of student newspapers in UP’s history, The Columbiad and The Beacon.

A year and a half after receiving a grant from the Oregon Heritage Commission, the entirety of these collections is now digitized and available through the library’s digital collections. These collections span over 100 years of student journalism, The Columbiad from 1902 to 1934 and, after the university’s name officially changed from Columbia University to the University of Portland, The Beacon, from 1935 to 2016.

This grant allowed the library to outsource the collection to Technical Imaging Systems, which is where the papers were actually digitized. After receiving the digitized files, a team of library faculty then went through and added descriptive information, such as the date and which collection it belongs to.

While much of this project was a waiting game while papers were being outsourced, Digital Services Librarian Philip Vue is pleased to now have this project completed.

“It’s rewarding because now we have something that anybody can use, you know, not just a physical print collection that’s hard to navigate, but now a collection that can easily be accessible and then also navigate,” Vue said.

The availability of these collections also brings some benefits for the UP community. An obvious benefit is that there are now snapshots of UP history online for anyone with library access to browse. With that, keywords can be searched for and information can be more easily found.

The ability to search for keywords or phrases can also benefit students when researching a certain topic. Additionally, there is a way to provide examples of work done while at UP for a resume or CV, Vue said.

Throughout the pages of past papers, historical moments at UP are kept alive. While working with the digitized files, Vue got to experience some of those moments.

“I came across a lot of interesting stuff like past presidents or presidential candidates that visit UP,” Vue said.

Some prominent people who visited UP and made it into the paper include John F. Kennedy, Robin Williams and Jay Leno.

The interesting sights don’t stop with celebrity sightings, but continue into special editions put out by The Beacon.

On and off from 1978 to 2010, the newspaper released an April Fool’s edition under the name of “The Bacon”.  The April Fool’s issue from 1999 reads “Why bother to report the news when you can just make it up?” and papers from various other years report the paper as being based in “Porkland”.

For another holiday edition, The Beacon came out as “The Boocon” in 1998 and 2003. Within these haunted pages are ghost stories, a tale of a ghoul in Waldschmidt, and reviews of scary movies.

Once pressed between the pages of archived newspapers, the stories of UP’s history, from the introduction of co-ed admissions to Terry Porter being hired as the head coach, are now spread out and ready to be flipped, or rather clicked through, once again. With everything the digitization has to offer, it is hoped that it will be used to its full potential. 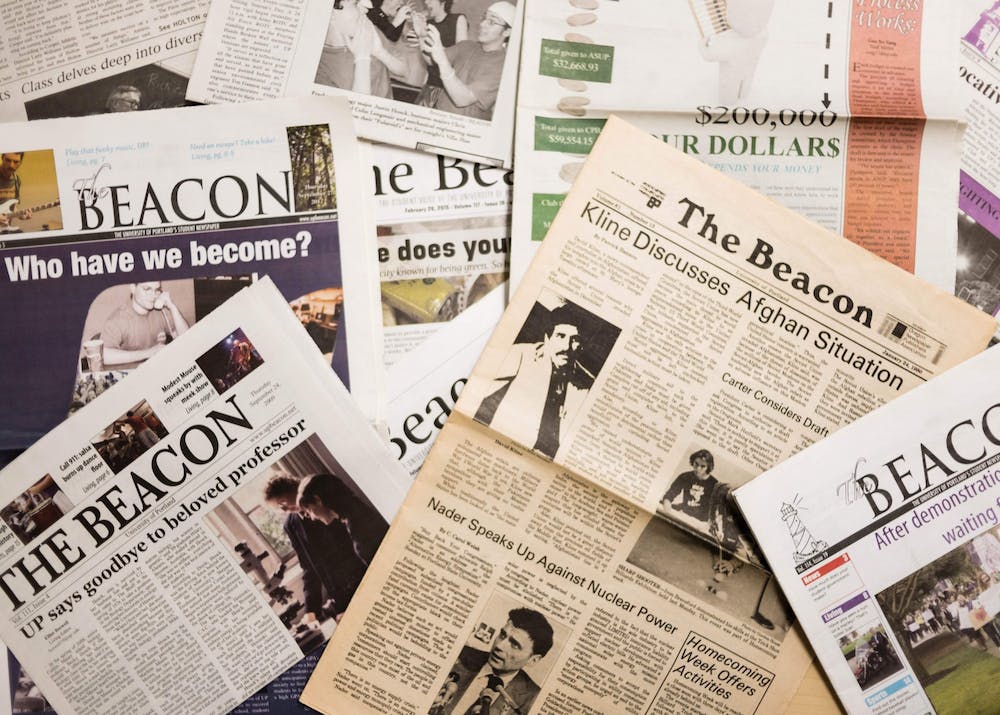 Clark Library to create digital archive of The Beacon