They’re on The Bluff at River Campus, laying flat on their bellies and focused on the enemy. Each dressed in camouflage with a tiny American flag patch sewn on their sleeves, holding what looks like semi-automatic rifles — M16s and M4s. They begin the ambush, pointing their rifles toward the enemy. Crawling through the bushes and scurrying through the trees, settling into position. An enemy is spotted. They wait for the command, and then they shoot. Bang. 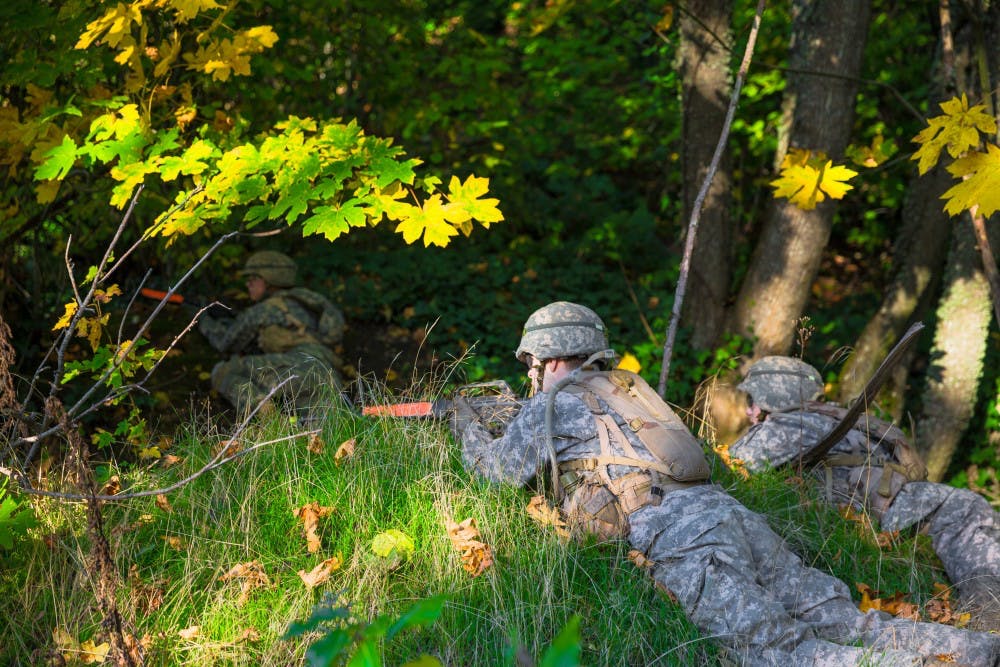 At the University of Portland, about 50 members of the Army Reserve Officers’ Training Corps (ROTC) battalion participate in leadership lab trainings every Thursday afternoon, along with students from nearby colleges. The labs involve cadets using fake rifles during their simulations. The rifles, made of hard plastic with rubber on the outside, are commonly referred to as rubber ducks. They don’t contain ammunition, and the metal barrel tips have bold, neon orange markings to show they’re not real. 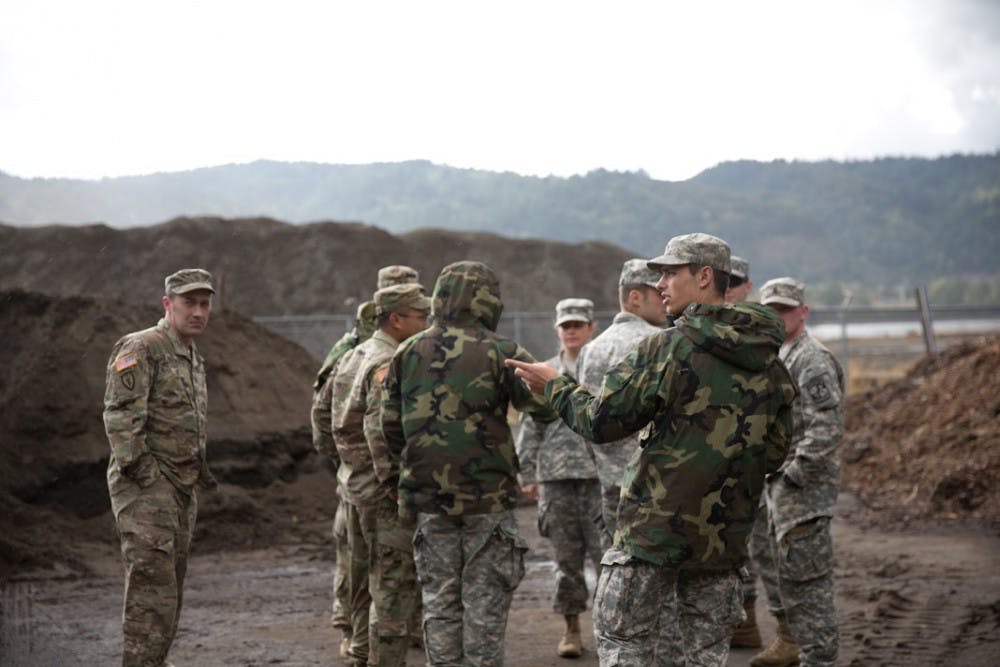 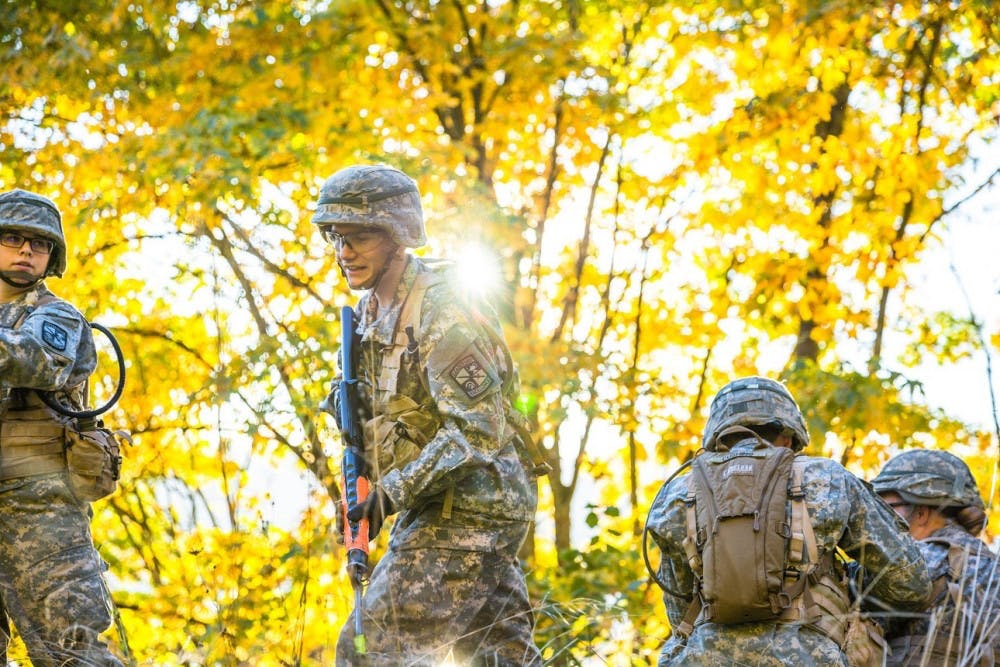 Without the markings, the guns could alarm people who happen to be walking by, even though they’re fake. In an age when deadly shootings have terrorized college campuses, concerts and most recently the First Baptist Church of Sutherland Springs, ROTC programs across the country face the challenge of training men and women to serve their country in combat without triggering panic.

“There are control measures in place to make sure there are no opportunities for accidental contact,” said Lieutenant Colonel McGee, a member of the University of Portland cadre.

By accidental contact, McGee means the UP battalion takes precautions in order to make sure people don’t mistake the replicas as real weapons.

Those precautions are part of a nationwide Army ROTC effort. A year ago, Major General Christopher P. Hughes, the commanding general of ROTC issued new training rules regarding the fake rifles. As reported in The Washington Post, the changes were triggered by an incident at George Mason University in Fairfax, Va, in 2016, when ROTC cadets in training were mistaken for possible active shooters. A similar incident occurred at the University of Maryland last fall.

ROTC programs now must mark the tips of the fake rifles with orange and transport them more discreetly in government vehicles. Though the nationwide ROTC directive took effect last year, the UP battalion had already been taking these measures to lessen possible concerns. This includes maintaining an understanding with UP’s Department of Public Safety. 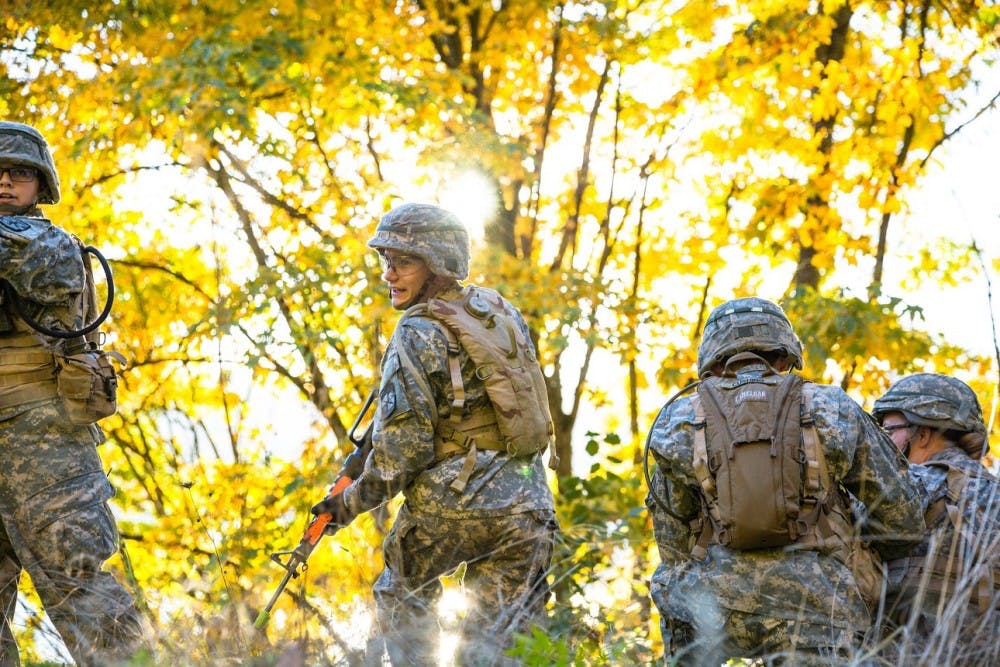 The UP handbook, Life on the Bluff, states that weapons are not allowed on campus, even if they are fake. ROTC has to request permission from Public Safety to use the fake guns. Gerry Gregg, Public Safety Director, clears the usage of the weapons, though no other members of UP are notified because he said it has never presented any concern during his time at the university.

“We just want to know what’s happening so if somebody does inquire what’s going on down there, we can offer an explanation,” Gregg said.

Before ROTC moved the lab down to River Campus in 2015, the cadets trained with the rubber ducks at Pier Park, which is near St. John’s. Neighbors and bystanders complained to Portland Police about the fake guns, which resulted in the move to River Campus.

The labs are simulations of possible scenarios cadets might face one day in combat. The ultimate goal of using the rubber ducks is to have the cadets familiarize themselves with the weapons and learn weapons discipline — as in where to point the barrel — during certain drills.

“What we are trying to do is get them used to carrying a weapon and teach them weapons discipline,” McGee said.

Marion Lilly, a senior cadet, explained one drill called “react to combat” teaches the cadets what to do when shot at. Cadets spread throughout the area and shimmy through bushes and trees “shooting” at imaginary enemies.

“(Cadets) go through (the scenario) and then afterwards we talk about it,” Parker Wiltrout, a junior ROTC member, explained. “What could’ve gone better? What went well? And then let’s do it again and see how we can improve.”

In addition to the weapons trainings, cadets learn other basic military skills. Some labs include military communication and land navigation through military radios. Though, the rubber ducks are used for a majority of the labs.