Hernández will be screening his award winning shortfilm on Sept. 8 from 6-7:30 pm in the Brian Doyle auditorium.

Walter Thompson-Hernández grew up watching planes fly over his neighborhood, daydreaming of all the worlds that extended beyond the ones that he and his community knew. Now those daydreams have turned into reality after his film “If I Go Will They Miss Me”, highlighting narratives he grew up around, won the 2022 Sundance U.S Jury Prize Award.

His short film will be screened on Sept. 8 in the Brian Doyle Auditorium in the Dundon-Berchthold Hall from 6-7:30 p.m. There he will host a Q&A afterwards to kick off Latinx Heritage month as the keynote speaker, sponsored by Portland Magazine and the Office of International Education, Diversity and Inclusion. This will be his third time sharing his experiences as a storyteller with the UP Community.

IF I GO WILL THEY MISS ME trailer x SUNDANCE 2022 JURY PRIZE from Walter Thompson-Hernandez on Vimeo.

“I hope students are able to see maybe a part of themselves in this film or [understand] the lives of these characters,” Hernández said. “I'm hoping they can take something away that inspires them to tell stories and novels in interesting ways.”

The narrative of the short film follows a young boy who lives in the Imperial Court Projects underneath an LAX flight path, five minutes away from where Hernández grew up. While the plot is fictional, it is based on real experiences and touches on the effects of environmental racism, disparities in under-resourced communities and will be made into a feature film.

“I think those conversations can exist in the life of this film, but it is very subtle and that was done purposefully,” Hernández said. “I think we know audiences are really brilliant and really smart, and I think folks are more than capable of coming to those conclusions on their own. It's been really exciting to see them have that experience.”

Within the past 10 years, Hernández has been “practicing” to become a filmmaker by working on passion projects like his book The Compton Cowboys and his podcast California Love — which are now being adapted into their own feature film and animated television series.

Through these projects he has been able to pick up skills that he believes prepared him to be the storyteller he is today.

“Filmmaking is all about storytelling,” Hernández said. “It involves writing, sound design, and creating worlds and fictional characters that are based on real experiences. I feel very lucky to be able to join all these different interests together.”

Hernández has transitioned into writing and directing full time but that was not always the case. The former New York Times writer wasn't always set on being a journalist; his time at UP mainly surrounded his efforts of being a student athlete.

“It’s really nice to track this evolution and to be able to come back [to UP] not as the student athlete, but as a writer and director,” Hernández said.

His life is coming full circle in the sense of returning to his alma mater, being able to express the projects that have been most meaningful to him.

“I think my motivation for making the film was to create and capture moments, worlds [and characters] that feel real and honest,” Hernández said. “... and make us reflect on the lives that we lead and transform us in some way.”

His work has been an avenue for his own reflection and transformation with his identity and where he sees himself and the people he connects with in the world.

“That's kind of what I did in this film,” Hernández said. “I didn’t really look far [for the narrative]. I just looked at the people to the left of me in my community and down the street and tapped into that.”

The storytelling aspects are what he was familiar with but the outreach for the means to create his project were a little foreign.

“It was my first film project,” Hernández said. “[Usually] people have the financial backing with studios and companies and that wasn't the case for me.”

Hernández was able to fund this project by utilizing the resources he had built up along the way and was able to take full creative control, letting him work with those he feels comfortable around knowing they would be able to understand his direction.

“As a first time filmmaker, there's almost no better way to learn,” Hernández said. “Everybody in the film was either related to me, or a good friend. So I'm looking horizontally and looking around me to find the people and the resources and I'm really happy with what we accomplished.”

Brie Haro is the Editor-in-Chief of The Beacon and can be reached at haro23@up.edu 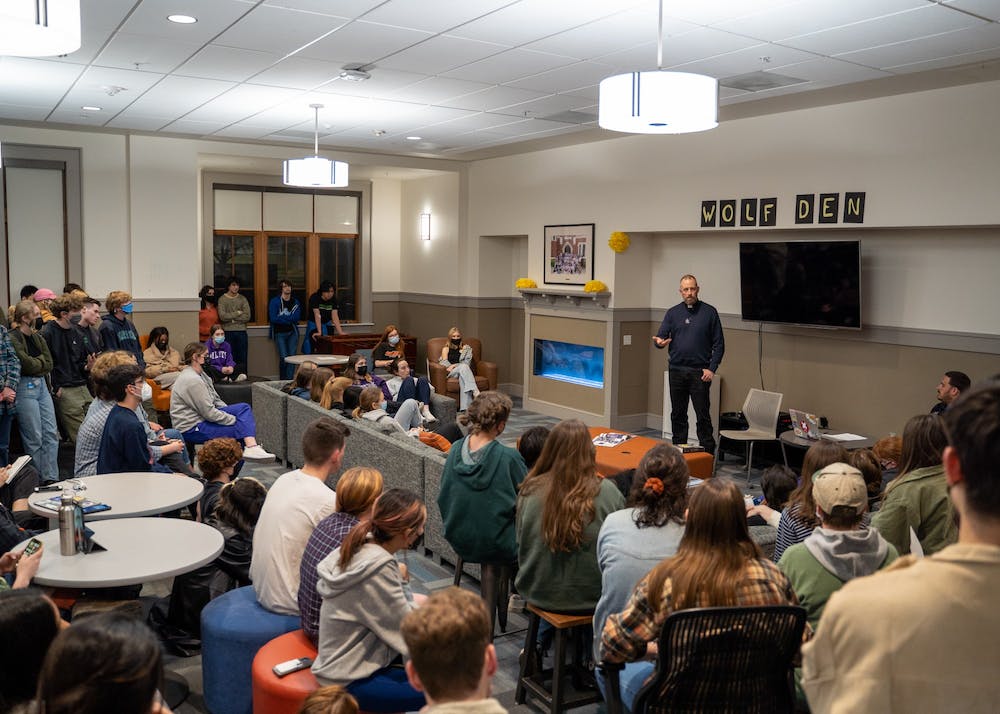