A look behind the construction of UP’s newest project

By Michael Lang and Netty Jurriaans | September 26, 2022 10:00am
Construction has begun on the University's new Shiley-Marcos Center for Design and Innovation.
Media Credit: Gavin Britton / The Beacon

An immaculate view over The Bluff. A maker space approximately three times as large as the current one. Open floor-plan study areas. These are just a few of the many features coming to the new Shiley-Marcos Center for Design and Innovation.

The project comes with a donation of $10 million from philanthropist Darlene Marcos Shiley. Her late husband, Donald P. Shiley, was a graduate of UP and a significant philanthropist that invented the revolutionary tilting disc heart valve and much more over the course of his lifetime.

The $40 million, 45,400 square foot building is currently underway with a scheduled completion for construction in November 2023. Its position behind the Donald P. Shiley School of Engineering will provide students and faculty in the building with a clear view of the Willamette River.

The Shiley-Marcos center will take the place of the Physical Plant facility, which is currently being deconstructed. It will be located behind Orrico Hall and in-between the L-P Tennis Center and Mehling Hall. The new Physical Plant building is now located at River Campus.

The slope of the land for the site will give the building a unique look: four floors with an entrance on the third floor from the tennis center side. The first and second floors will provide key access for many of the shops that will be housed there.

The main goal of this new building is to provide a space for not just engineering students, but for all students, according to Dean of the Shiley School of Engineering Brian Fabien.

The fourth floor includes an art and drawing studio, replacing the one previously on the bottom floor of Buckley Center. Also on the fourth floor is an open kitchen for a more casual collaboration space.

The digital lab is moving out of the library and into the new building on the third floor alongside the maker space. This maker space includes machinery such as 3d printers, laser cutters and sewing machines.

The relocated maker space will also transpose the visions of the current one. However, the much larger and more accessible space will ideally eliminate some of the financial and operational issues encountered with the original maker space in Shiley.

The second floor will be the fabrication space: metal work, woodwork, welding area, electronic shop, etc. There will be a student project space on the third floor as well.

The first floor is designed with four 1000 square foot project-based spaces. These spaces have been turned from old Physical Plant workspaces into student workshops. The spaces will be used for faculty research, the motorsports team, the robotics team and industry partners as well as a space for on campus internships.

This diversity between each floor of the Shiley-Marcos center is a highlight of the facility for Salvador Orara, the innovation professor of practice and director of the innovation minor.

“I think that’s one of the best parts about this [building],” Orara said. “You have the art department, the design programs and you have this idea that those two things together coalesce to push and propel innovation and innovative thinking.”

Sustainability efforts are also being considered in the project. According to Jennie Cambier, Vice President for Land Use and Planning, key, structurally sound foundations to the former concrete building will be preserved. This decision will not only save time and money, but it will reduce carbon emissions from the production of excess concrete.

The renovation will also target LEED Silver sustainability standards to maximize the efficiency of the building. Original trees along the tennis center side of the site will remain in place as well.

According to Fabien, students should not expect the construction to impact their education and the transition should be seamless. The space is something students should look forward to. It will enhance their hands-on experience and will allow collaboration between students of all majors.

Orara hopes to cultivate a space in the Shiley-Marcos center that goes even further than just thinking and designing with an innovative mindset.

“I’m looking forward to being able to have that space not only to facilitate training the hands and the mind to make things, but also the heart and the ethics behind the things that we seek to do,” Orara said. 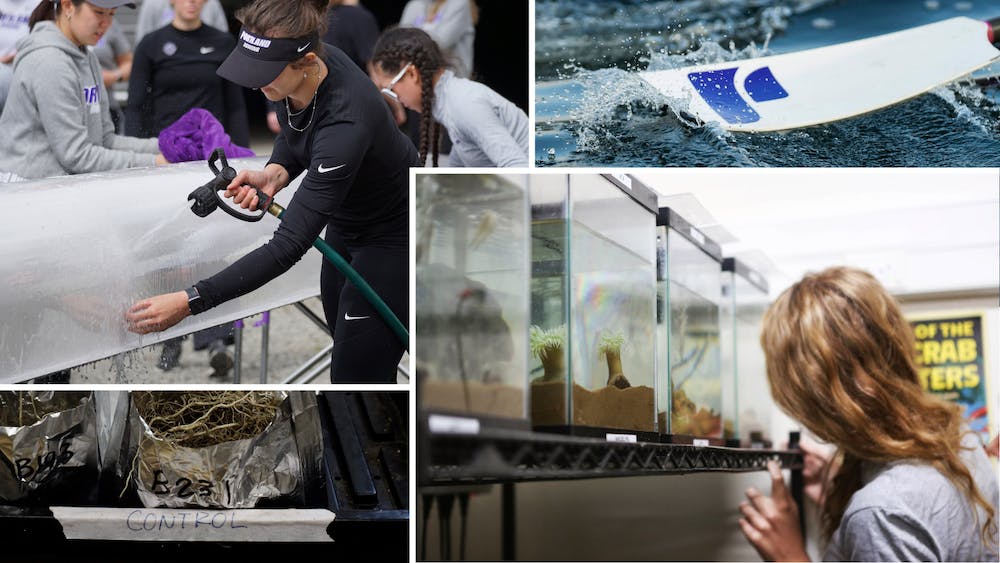 More than just a boathouse

by Brie Haro and by Wilder Isom

Outside of the classroom: Engineering capstones provide real-world experience