One year after COVID-19 was declared a global pandemic

By Lulu Heffernan | March 11, 2021 10:10pm
Students pack their belongings and their aspirations as they leave spring semester behind.
Media Credit: Brennan Crowder / The Beacon

Campus life pre-COVID now feels like nothing but a thing of myth. Events that qualified as big news included things like Mack’s Market charging for bags and the announcement of the headliner for an all-female Rock the Bluff — an event where a crowd of people would be together in close quarters with no masks. Oh how the year has changed.

On this day last year, COVID-19 officially became classified as a pandemic and March 18 marks one year since the University of Portland went online. This past year has been one for the history books, yet living history and learning history are two very different experiences. After multiple online semesters, students moving out of dorm halls, a resurgence of the Black Lives Matter movement, a new US president, large changes in UP administration, and the announcements of two cancelled graduations, it can be hard to remember what life was like a year ago.

The Beacon asked several students to share their stories of when the “new normal” began and to submit photos of the last normal thing they did before the pandemic. Here is what we found:

What was the moment you realized COVID was going to change everything?

“There was definitely a moment for me. I was at a regional basketball tournament in Juneau, AK, when they started announcing things such as not to give any handshakes. They also cancelled a dance event that occurred right around the time too. It was kind of scary because nobody was sure if the basketball team would even be able to compete with such big indications of COVID in such a short time. Our athletic director came with us to the tournament and she received thousands of texts about cancellations for her fishing charter business because of the rapid changes from COVID. Those two events were when I realized that this virus would be for real and was going to be taken seriously.”

“When we found out that everyone had to leave, it wasn't hitting me yet that it was going to be super serious just because I was thinking, we're all already pretty much isolated on campus. How could there be anything serious about it? We're all on campus, no one really goes anywhere. But it wasn't until I moved out and I moved in with a couple friends that were an hour and a half away, and one of my friends that I was supposed to be living with ended up flying home, so I had to move in with another couple of friends. And that was when I started to realize it was becoming serious because they were shutting down flights going back home to Hawaii. They limited it to one flight or something. So my friend just flew home in the midst of that, just hoping to get home. So I was stuck in Oregon for about two months. So that was like when I realized,  ‘Oh my god, I might not be able to go home, because of this whole thing.’ I think that was when I realized COVID was going to be serious.”

“Probably in Kenya when the US embassy started doing evacuation flights to go back to the states because people had no way back otherwise. It was the day that my mom said we were going to get on one of those flights and I knew that I was going to miss my graduation. I only got to say goodbye in person to two of my friends.”

“I realized COVID was going to change everything when schools were being shut down and moved online, and office workers were being sent home, and everyone barricaded themselves in their homes.”

What was it like for you when UP shut down?

“It felt like the exact opposite of what I wanted for my future. I had just begun to have amazing memories at the University of Portland during my sophomore year and I wanted to continue those memories into the spring, but I had to go home and isolate myself from all those memories I thought I would gain. Going home was very challenging for me because I had just started feeling independent and I felt the desire to continue on my own but having to be at home with my family for the foreseeable future made me feel like I was back in high school. Back in a time that I wished to forget.”

“It was very stressful and scary. I knew that going home wasn’t an option for me because there wasn’t a room available, so I was frantically trying to figure out where I was going to go while also having to pack up all my stuff. Also, it was very emotional. I knew that was going to be my last semester in the dorms and this was not how I pictured my dorm experience ending. I really loved the dorms and it was sad to leave.”

“So when UP shut down, I did not want to pay for an online education. So I got the email, and I was like, that ain't for me. So I transferred. I deferred my enrollment into the spring semester and I transferred to my local university, University of Nevada, Las Vegas, and with the governor scholarship and, you know, in-state tuition it was practically free so what I ended up doing is I did online there while I moved to San Francisco where my other family members lived.”

“At first I was kind of excited about canceled classes, but then after that I was sad because some of my friends had to go home and I was especially worried because I knew online school would be difficult. Also, I did the Public Research Fellows program and our symposium was supposed to be March 13 and that’s the day we shut down so like a year’s worth of work that I didn’t get to showcase which I was kind of bummed about.”

What are you most looking forward to when the pandemic is under control?

“I would love to eat in a restaurant again. I really hate doing dishes after every meal.”

“Being able to hang out with more people when it’s safer. I’m also excited to sit inside a coffee shop and do my homework and to travel to see my family in England again.”

“Being able to be with people again and have real human interaction because I have had so little of that. I’ve been so deprived of that over the last 12 months, it has really changed me in ways that I can’t really explain, but it’s been very difficult and I just wish I could be around people again because this is such a weird feeling this isolation.”

“I know everyone says the typical things like concerts and sporting events or going back to class in person and I am excited for those things too but also just the little things like doing homework at a coffee shop I’m really excited to eventually get back.”

“Seeing people in the streets without their masks on.”

“I am most excited for full schedule in person classes and hanging out with people with less restrictions. I'm just really glad that the gyms are also opening again. I am really looking forward to doing everything without a mask at some point. I want everyone's happy smiles.” 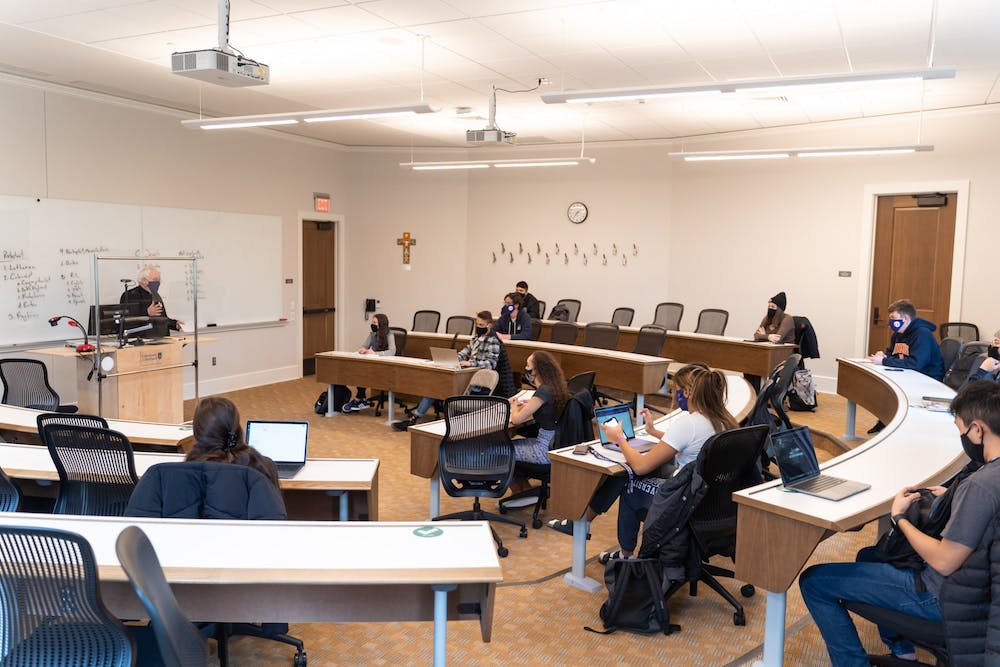 Volunteer professors thrilled to see masked faces back in classroom

by Lulu Heffernan and by Sadie Wuertz