To go packaging has become a staple at the Bauccio Commons.

There’s over 830 students currently living on campus. Multiply that number by roughly 2-3 meals a day and then multiply that number by 7 days a week. That’s over 11,600 take-out meals being served each week, and that’s on the low end of the range. Now imagine the sheer amount of garbage associated with those same 11,600 meals.

Since the beginning of the pandemic, the usage of disposable items like masks, single use menus at restaurants and plastic bags have surged throughout the country and the world. As no dine-in eating is allowed within the Commons this semester, items like take-out boxes, paper bags and cups, and plastics have dominated the packaging of food from the Bauccio Commons, which is currently the only dining location open on campus.

In fact, the usage of paper alone has put a dent in the amount of money spent outside of just food products for Bon Appetit.

“When all operations are open, the spend for a week of paper would have been about 1,900 dollars to 2,000 dollars,” Kirk Mustain, general manager of Bon Appetit, said. “Now, [transitioning] into 800 people on campus and one operation, and our paper costs are about 6,200 dollars a week.”

That’s a whopping weekly increase of over 220% for a campus that’s not even currently filled to capacity.

Not only has the amount spent on paper products increased, but the sourcing for those same paper products has become limited given supply and demand. With such a great demand for disposable items such as the boxes and bags within the restaurant industry and beyond, expenses become a greater priority over sustainability for the time being. Food prices and the cost of protective wear, such as gloves, have increased as well.

As such, the pandemic has forced Bon Appetit to re-adjust the purchasing of these products to establish a balance between sustainability and a reasonable price to pay.

“There are some more sustainable versions, but they’re three times the price,” Mustain said. “We also took into account that there’s already a financial impact on everybody for going to school this year, and to exasperate that I think on a daily basis wouldn’t be a wise decision.”

One consequence to utilizing thousands of boxes for carry-out dining has been the amount of waste being produced by those materials here on campus. From overflowing garbage cans to uncontaminated paper bags being thrown in the trash, there has been an uptick in the rate at which students are disposing of their food packaging.

“We’re actually picking up more now than pre-pandemic, even though we have less people on campus,” Physical Plant Director Joe Cates said. “The exterior trash cans in high traffic areas are emptied daily.”

In addition to the increase of trash pickups, there have been discrepancies in what gets thrown out and what gets recycled. Any paper boxes or bags contaminated with food should be thrown away while uncontaminated ones should be recycled.

“We’re seeing two things: Either people throw [materials] all in the trash, or they throw it all in the recycling, and neither one is the right solution because some of it is recycling and some of it is trash,” Cates said.

Those subtle decisions in either throwing away or recycling items impact the amount of time spent manually separating wrong combinations at the Physical Plant.

On a broader scale, the increase in global consumption has brought attention to the need for more sustainable practices, especially with news like masks and plastics being found in the oceans.

“Consumption especially in the pandemic has just been remarkable,” Kali Abel, an environmental studies professor, said. “It’s the immediate need that becomes the priority. Sustainability is something that we tend to be able to look at when things are normal or we’re less stressed.”

With a nearly full reopening projected for the fall, UP should be able to get back on track with more sustainable practices. These could, for example, encourage students to dine in or utilize reusable containers more often.

“We [charged] for boxes,” Mustain said. “It was a way of trying to incentivize people via their pocketbook to make a better decision. It worked pretty well.”

Additionally, Mustain looks forward to the usage of the composting area in the Commons again once its reopened to full capacity. The nearly two tons a week of compost generated under normal circumstances gets treated and mulched with dirt and twigs, eventually being resold in stores like Home Depot. 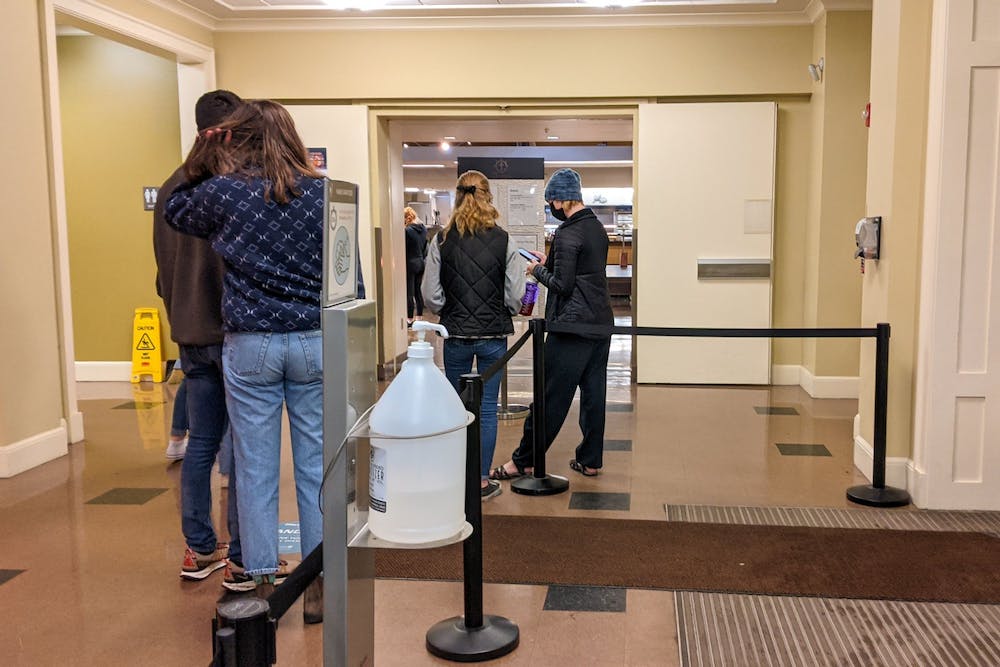