By Cole Carden | November 2, 2020 6:19pm
Cole Carden is the video producer for The Beacon. Photo courtesy of Cole Carden.

Disclaimer: Psychedelics are potentially illegal substances; therefore, my intentions are to present (in my opinion) valuable information on the topic. I do not encourage the use of these substances where it is against the law.

All humans search for liberation within their minds by confronting their consciousness. Some may attempt to do it through internal questioning, others may try through social opportunity but most experience a challenging time breaking through. Those who experience depression, anxiety, those who co-depend on substance abuse, those who feel lost and emotionally drained, and even those who feel content or are simply searching — the second wave of opportunity is here for them.

Psychedelic (mind-revealing) drugs such as d-lysergic acid diethylamide (LSD), psilocybin (magic mushroom/shrooms), and DMT (dimethyltryptamine) are capturing people’s imagination and pervading pop-culture on a level not seen since the 1960s. For the small, but increasing, number of people researching these complex compounds, it seems more likely that they will stimulate psychology and psychiatry in significant ways for the next decade. Pioneering research is currently underway in the heart of West London at Imperial College, John Hopkins, UCLA, and other world-class institutions that have blessed society with a new understanding of how psychedelics answer, treat, and potentially cure Western society's mental health epidemic. Oregon, among future states, has an opportunity to apply this knowledge coming November in the form of a psychedelic therapy ballot: to decriminalize and legalize psilocybin-assisted therapy.

The brain is the costliest organ to treat in the human body. Globally 264 million people have depression, of which, lasts an average of 18 years. In the United States, 17.3 million Americans are currently living with some form of depression. In the state of Oregon, 25% of the population experience episodes of this psychological illness. Out of our fifty states, Oregon ranks number one in depression rates between 2014 to 2018, with a percent increase of 9.17%. There is some speculation as to why this is the case in Oregon, but unfortunately the reasons are not clear. The lack of mental health care facilities paired with usually ineffective long term patient success could increase Oregon’s placement in the country.

Depression is a complex and commonly misunderstood psychological condition. This is because of the multidimensional nature of depression contributing to the mental rut people may find themselves in. It is also a relative to each individual. Certain people can be more or less resistant to the available psychiatric treatments depending on genetic history, early childhood development, and emotional and physical well-being, among other factors. States with higher levels of access to mental health care saw decreasing rates of depression. Oregon ranked 23 in its position of access to these treatments.

When considering psychedelics' therapeutic applications, nearly all modern researchers agree that these substances should never be regarded as mere pills, nor should they be free to roam the hands of recreational users. Psilocybin, LSD, and DMT remain the classic triad of the psychedelic realm. Psilocybin, the active psychoactive molecule in magic mushrooms, resurfaced in the last decade from the prohibition created by the 1970 Nixon Controlled Substances Act that declared all three as "highly abusable, lacking medical utility, and unsafe under medical supervision."

However, even though we fail to listen, it is clear as history has shown us that improper drug policy and regulation result in no harm reduction. If anything, consumers simply turn to convenience, or back to already established, more addictive, and harmful drugs like cocaine, heroin, methamphetamines, alcohol, nicotine, tobacco and so on. The force of human nature continues to overpower regulation. This has been blatantly obvious throughout history: The Prohibition Act of 1920, the Dangerous Drugs Act of 1920, the Controlled Substances Act of 1970 and the New Psychoactive Substances Act of 2016. Ignorance does not seem to be present in the cabinets of government. It might just be that policy creators like Nixon’s administration of the 1970s understand precisely the potential of these substances.

How can psychedelics help

Psychedelic research is essential for many reasons. Among them, the most promising at the time of writing this is their therapeutic potential. For instance, understanding the neural mechanisms of treating depression, acute anxiety, addiction, post-traumatic-stress-disorder (PTSD), obsessive-compulsive disorder (OCD), eating disorders, alcoholism and heroin dependence. The foci of research has since shifted from proving these drugs are non-addictive and house a low toxicity profile to focus on psychedelic-assisted therapy applications, creating a new form of psychotherapy and psychoanalytic treatment. Both of these are used to treat these neurotic conditions but fall short in their capability to access the more profound realms of the human mind: the unconscious.

The unconscious mind and healing

There is particular importance in mentioning the unconscious mind. This is because the unconscious is believed to be where the brain stores deep psychological trauma accessible only during select states of consciousness. Since the birth of psychoanalytic theory in the 1890s, the only way the approach aimed to access the unconscious was through free association and dreams, developed by Sigmund Freud, and later revised by Carl Jung. This proved difficult for two reasons — patients don't always remember their dreams, and when they do, it is at best imperfect. On the other hand, free association can be spotty and unreliable when in neurosis' mental state.

Robin Carhart-Harris — the leading researcher at Imperial College in West London — discussed, in an interview with Michael Pollan for the book “How to Change Your Mind”, the combination of psychoanalysis and psychedelics: “Freud said dreams were the royal road to the unconscious. Psychedelics could turn out to be the superhighway.” Two distinct reasons modern science is beginning to uncover are highlighted by how psychedelic-assisted therapy offers unlimited, in-depth access to the unconscious — assuming that they are used in the appropriate setting with the right intentions.

Psychedelics' phenomenology at its most basic level, if there is one, operates to decompartmentalize (meaning unify) the brain into primary states of consciousness, similar to dream sleep and other mystical states. This is the first discovery that modern research highlighted in pioneering studies with fMRI scanners and psilocybin. They concluded that "unrestrained consciousness" is associated with a deactivation of brain systems responsible for where our sense of self and ego are integrated.

Secondly, and closely tied to the discovery of unification between brain regions, is the discovery of a network attributed to the ego. Science now identifies the ego as the Default Mode Network (DMN), which among many functions, operates as a large-scale brain orchestrator for different compartments of the brain's global functioning. The eloquence of Robin Carhart-Harris' words explains it further: "Normally our brain consists of independent networks that perform separate specialized functions, such as vision, movement and hearing-as well as complex things like attention. However, under a psychedelic, the separateness of those networks breaks down, and instead, allows for a more integrated or unified brain.”

Of Harris’ conclusions following the first modern psilocybin and LSD studies, his group recently published a theory on how psychedelics work, "The Entropic Brain: A Theory of Conscious States Informed by Neuroimaging Research with Psychedelic Drugs." In summary, they elaborate on the DMN in how it creates the development of the ego that holds synchronically the personality and various faculties that make up the human psyche, providing the opportunity for neurological connections between centers of the brain that habitually cannot communicate. This increases brain spontaneity by decreasing the brain's resting status of order within neuronal firing patterns. The London team calls this a high-entropy (disorder) state, similar to that of a child's brain: open to possibility, expansive, associative, and unfettered.

The theory's central hypothesis insists that "psychedelics induce a primitive state of consciousness by relinquishing the ego's usual hold on reality." Their approach presents an essential explanation for why certain conditions such as depression correlate to a low-entropic (highly rigid) brain that can successfully be treated with psychedelics. A different set of wording may also be useful; someone who is constrained to the ego's dictatorship and its desire to maintain continuity through addictions or other repetitive thoughts and behaviors could benefit from treatments with psychedelics to lubricate cognition. I believe the DMN is a slice of the mind's geometry, and when left unattended, results in a loss of coherence and unity potentially degenerating into psychosis.

Coming November, Measure 109 would change Oregon's legislation and allow the Oregon Health Authority (OHA) two years to establish the program and create regulations. An Oregon Psilocybin Advisory Board (OPAB) would advise the OHA to determine eligibility to be licensed as a facilitator, what qualifications are necessary, the necessary education, and exam requirements. Further, the OHA would be responsible for creating standard dosages and labeling package rules. Citizens over the age of 21 would be allowed to purchase, possess, and consume psilocybin at a psilocybin service center under a specialized therapist's supervision after undergoing preparatory sessions. The FDA has given psilocybin therapy approval for phase 3 clinical trials involving hundreds of volunteers to treat depression and a breakthrough therapy status to expedite the clinical process. The legalisation of psilocybin alongside therapy maximizes patient success; without therapy, it only maximizes profit.

A renewal of the scientific paradigm seems inevitable because — from the medicalization of psychedelics — reduction science will soon be tasked with explaining the spiritual and cosmic experiences people have with them. Therefore, understanding how psychedelics work, instead, mandates a new scientific model of how the brain, mind and spirit are related. Finally, it may seem odd that an illegal substance may help with a wide variety of conditions, but this is not so strange if you consider that psychedelics frequently possess the power to aid the individual to break patterns established by the ego and that they do not interact with the pleasure centers of the brain. With only a materialist model for understanding these substances, humanity may fail to realize a more profound understanding of our universe and the evolution it's destined to have.

Cole Carden is the video producer for The Beacon. He can be reached at cardenj21@up.edu. 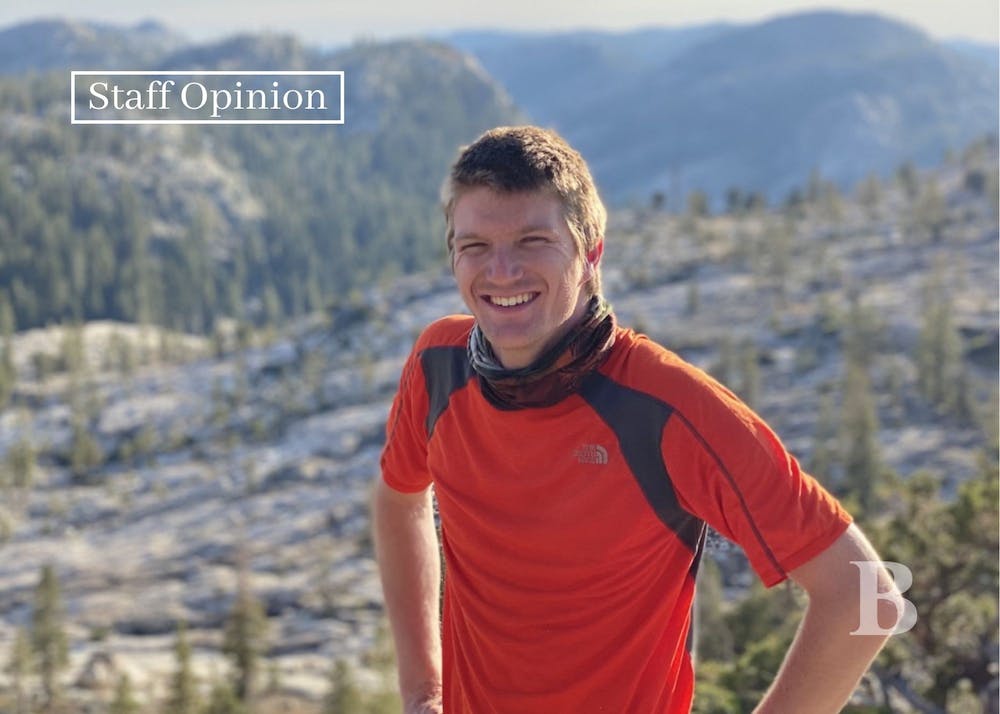 STAFF OPINION: Make your voice heard then take a nap