by Brennan Crowder / The Beacon

In the weeks leading up to opening night, the costume shop in Mago Hunt is alive with humming sewing machines and chattering costume technicians. The space overflows with half-assembled costumes, endless yards of fabric and mood boards for inspiration. Most recently, those mood boards have been driven by the University of Portland theater department’s production of Margaret Atwood’s “The Penelopiad,” a spin on the often-neglected story of Odysseus’ wife Penelope from “The Odyssey.”

From Nov. 13 to Nov. 17 at Mago Hunt, the crew of “The Penelopiad” and the all-female cast will bring the original text new life. But in the action that unfolds onstage, the audience may lose sight of an important aspect of storytelling — the costumes. Typically, the theatre department relies on costumes that are brought from home or dug out from storage. However, for “The Penelopiad,” a team comprised of student technicians, costume designer, and director has worked to create each costume from scratch, making them representative of the story and each character. 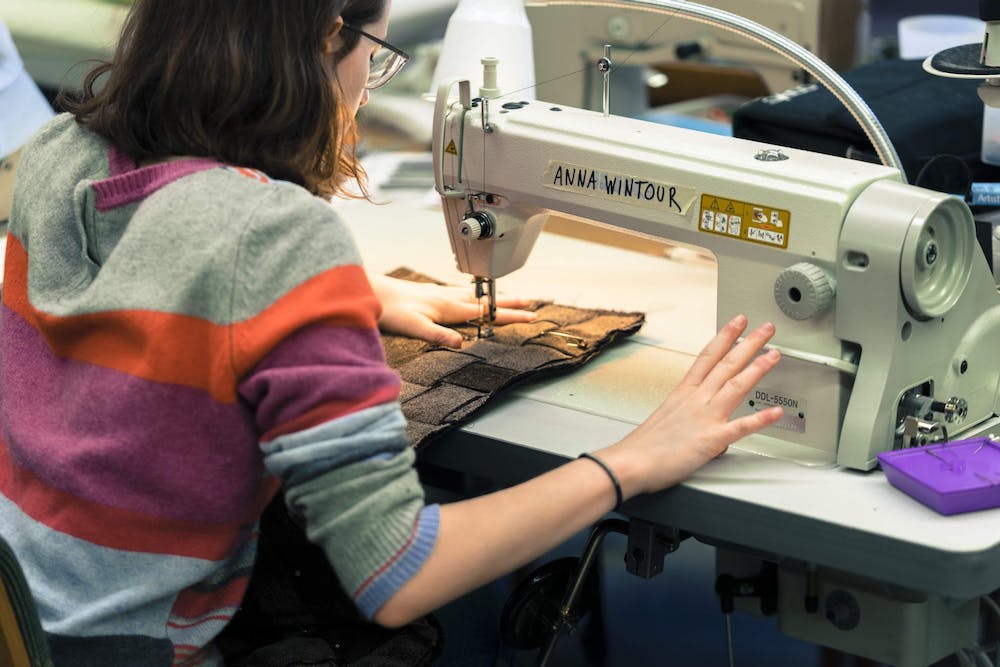 UP’s costume department had a specific set of responsibilities because the play is set in ancient Greece with different actors playing different characters. During the initial stages of the process, costume designer Sue Bonde and the play’s director, Tim Wagoner, worked closely with the script to find a starting place.

“The first part of the process is for me to sit down and do some research. I try to figure out a way to show visually what he might understand verbally,” Bonde said. “The script is our Bible. We need to pay attention to every word to understand how color and costume interact with the dialogue.”

A close working relationship between the director and costume designer was crucial for efficiency and success in the production process. Though they have largely different jobs in the big picture, the visual nature of the play is something that greatly influences both of their work. 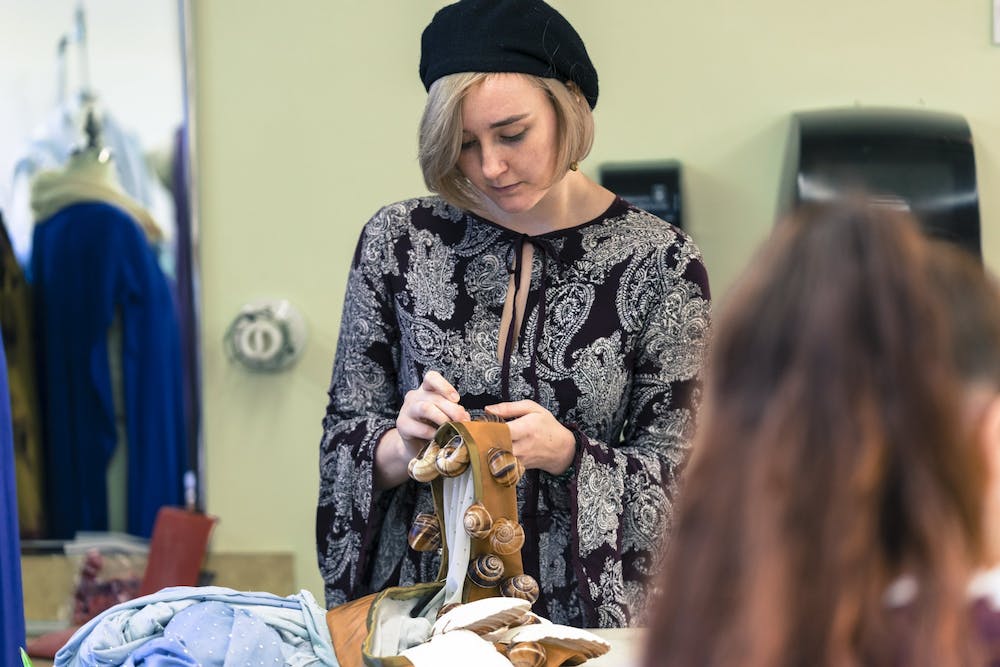 “Good directors are visual artists too, they know that they are creating a stage picture,” Bonde said. “Tim is visually oriented and he knows why the story should be told today which is what makes it relevant and meaningful for me to work on. Everything I do I run by Tim because it is ultimately his show. His job is to bring all of the artists to a unified vision.”

Bonde also stressed the importance of doing both historical and theatrical research to understand the techniques used in the play’s storytelling, specifically on the concept of a Greek chorus.

“In the design process, we want to understand where this play is situated in the history of storytelling,” Bonde said. “We have to ask different questions like: what is a Greek chorus, why did this playwright use it to tell the story and how has it been portrayed in other productions?” 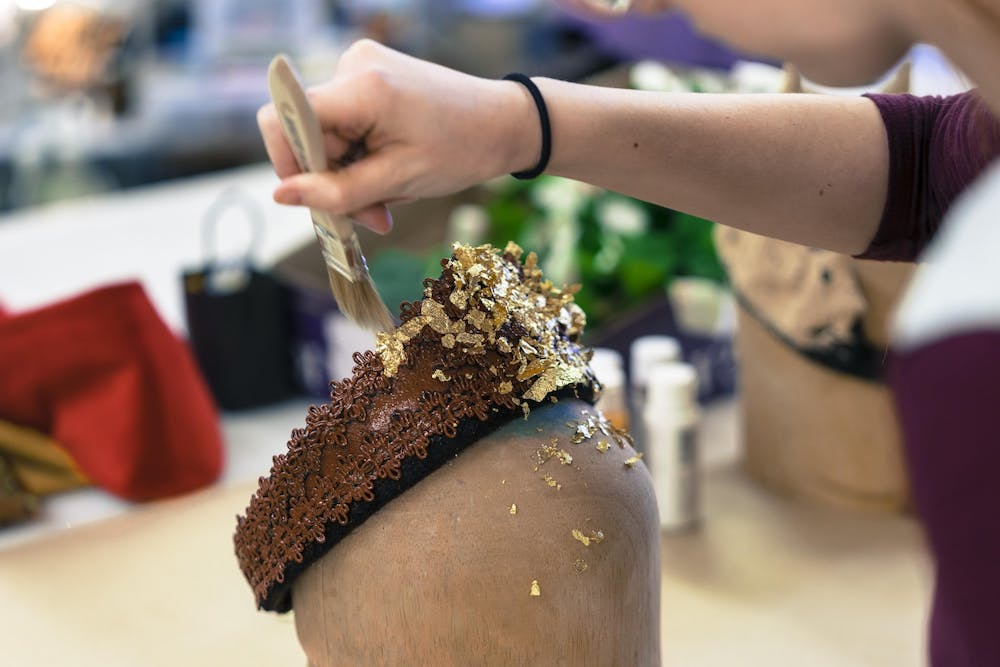 The Greek chorus, a fixture of the classic Greek drama, is a group of actors who narrates and comments, usually in interludes, on the main action of a play. For this play, the chorus is comprised of Penelope’s maids.

Wagoner said that the members of the chorus must have a twofold sense of identity — something that must be reflected through their costumes.

“I think that they both have one voice and then they have individual stories to tell and reasons why they play each character,” Wagoner said. “Penelope has the position of power as the queen of the house and these maids are told what to do so as the chorus, their power is found in numbers.”

Bonde spoke to what this means on the design side of things.

“For any show I’m doing I create a mood board. I put together imagery, texture and color and try to figure out what vibes I get from it,” Bonde said. “It’s all about taking words and translating them into images, just like how writers take images and translate them into words. It’s a back and forth with both sides of the brain trying to find a balance.”

Once Bonde has worked through the script with Wagoner, researched, and created renderings, she configures the actual physical pieces. This part requires her to consider the more functional aspects of how each garment will interact and work with each other.

“Everybody has the same basic piece,” Bonde said. “This piece allows them to do what they need to do, it is breathable, and the pants look gender neutral. We wanted a neutral palette so that we could add pops of color throughout, allowing them to really become the different characters.”

These considerations were front and center for Bonde, especially in a play where the all-female cast will at times be playing male characters.

“One of the challenges for this show is that all the women are telling the story while also playing the roles of men,” Bonde said. “So, with 12 different bodies up there, I had to ask: What was the uniform that would work for all different body types that the women would feel and look good in? We also wanted to say something about the relevance of the story for today’s audience. So, we wanted to have this mix of Grecian drape, but also modern clothing.”

The costume team’s method of designing and building often changes depending on what the specific play requires. For some shows, actors bring in clothes from home, find them from the stock of costumes the department has, or purchase them from an outside source. However, for “The Penelopiad,” which involves layered and specific costumes, the process is more hands-on and intensive.

Creating versatile costumes lies mostly on the shoulders of a team of costume technicians. As full-time students, some of whom are not theater majors, managing such a heavy workload along with their studies is no easy feat. Senior computer science major Allison Jacobs explained how this balance affects the overall process.

“The most difficult part of this job is the fact that we all have different schedules,” Jacobs said. “We are students first and our main focus is on education, but when you’re designing a show, the process doesn’t stop just because you have class. That also means when you’re working on a specific garment it’s not just you working on it; there are a lot of people who each help make it.”

Collaboration, whether between designer and director, technician and technician, or actor and technician, is extremely necessary for the success of the final product. Technicians need to consider the actors’ movements throughout play, making sure the costumes stay intact.

Junior theater major and technician Leah Rowse recognizes the importance of costume for the actors.

“As someone who acts and does costumes, being able to wear the clothes of that time period or just having something on you helps you integrate your character more into their world and surroundings and then that is visible for the audience,” Rowse said.

Junior theater major and technician Amanda Ryan also understands the influence that costume design has on the audience’s reception of the play.

“Costuming is a language. It gives a production presence and can be really world-building,” Ryan said. “It communicates environments and feelings, and can convey mood through colors and textures just as much as the actual words the actors are saying can.”

After weeks of designing, building, and putting the final touches on costumes, technicians will see their work on-stage this week.

An earlier version of the story inaccurately stated that Amanda Ryan was a sophomore. The story has been edited to accurately reflect that she is a junior. 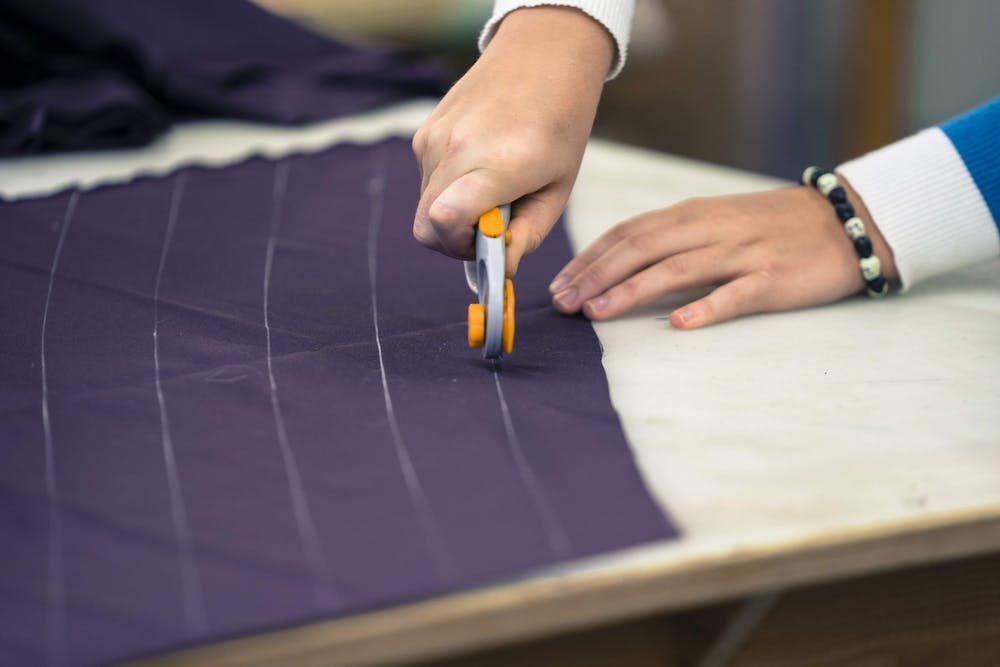