Last semester, during her Latin American Short Story class at the University of Portland, Angela Gonzalez was persuading one of her classmates to attend prom.

“Prom? Why are you two talking about prom?” a third classmate asked.

At the time, Gonzalez, now a full-time UP student, was a senior at nearby Roosevelt High School in St. Johns. She and her classmate were part of a program that allows five Roosevelt students per semester to enroll in a UP course. Former Associate Provost Matthew Baasten started the partnership with Roosevelt in the fall of 2015 for students who had taken all the courses there in a given subject, explained professor and director of the Spanish program Lora Looney.

The Roosevelt students have enrolled in classes in a variety of disciplines at UP, but many take Spanish, and they are always content-based, upper-division courses. Students tend to be heritage speakers of Spanish and/or highly gifted learners, Looney said.

“We are very grateful (for the program),” Looney said. “The Roosevelt students always raise the bar in the classroom, so any academic standards that were in place, they have to rise.”

This semester, Looney has three Roosevelt seniors in her Spain Today class: Ashley Moo-Julian, Vanesa Frutos-Rodriguez and Evelyn Avila-Jimenez. On Mondays and Wednesdays, they take the #44 bus to UP and enter a different environment. Although their rigorous high school Spanish program prepares them academically for college-level coursework, they’ve encountered many of the same challenges most students experience when they start college.

“They might not have grappled with the wider world yet conceptually,” Looney said. “I think it’s youth, and I also think it’s because high schools tend to be not as exploratory.”

Frutos-Rodriguez described one of these differences.

“The class is interesting, but maybe in high school, classes were more hands-on, and this is the first time we really have to pay attention to (lectures),” Frutos-Rodriguez said.

They also ran into the struggles of deciphering a syllabus that have tricked many college students.

“They understand the whole syllabus thing,” Moo-Julian said. “I thought the dates listed next to it was the homework for that night, but it’s the homework due that day.”

Experiences common to many other UP students, like choosing a major or studying abroad, are also unfamiliar.

Avila-Jimenez described a project this semester where each student was assigned to research some aspects of Spanish life and culture. She was assigned to the wine industry.

“We had to answer questions about, ‘How does it connect to your major and your life?’ But I don’t have a major, and I can’t drink, so I didn’t really know how to answer her questions,” Avila-Jimenez said. “We also don’t have that experience of studying abroad. So, when we hear people talking about that, we can’t really relate because we haven’t had that chance yet.”

Nevertheless, they said they feel just as able to participate in class and collaborate with their classmates and the professor. They also don’t think they’re treated differently by students because of their youth.

“They didn’t think we were high school students,” Moo-Julian said. “I was invited to join the Women of Color Club, which seemed really cool, but I’m not a student at UP.”

For students who are used to a more diverse school environment, the prospect of attending a school like UP can be daunting. UP’s Office of Admissions recruits at Roosevelt through college nights and the AVID college access program, among other efforts, explained Casandra Esparza, assistant director of admissions who also oversees diversity recruitment and community partnerships. While UP does regular outreach, Gonzalez says there are barriers that could stand in the way of some Roosevelt students attending UP.

“People should know that there are a lot of barriers for (Roosevelt) students to come to this private school, despite it being down the street,” Gonzalez said. “I know many students who considered coming here, and they were very strong students. But, financial aid or other barriers stand in place.”

Gonzalez wants more Roosevelt students to be able to continue their education at UP.

“I know we all took advantage of this opportunity and we all got a lot out of it, but many of us wish we had the option or the privilege to come here. If so many students take classes here, why don’t they end up coming here?” Gonzalez said.

She took a Spanish class both semesters last year and also noted that Roosevelt students performed on the same level as UP students in her classes.

“In our cuento (short story) class, it’s not that I was hiding the fact that I was a high school student, but it never came up,” Gonzalez said. “I don’t think anyone treated us differently, or at least I didn’t let myself think that, because by that point, I was like, ‘I’m just as capable as everyone else.'”

Gonzalez even presented on a Don Quixote panel at UP’s Founders’ Day last year, an event normally for juniors and seniors who excel in their classes.

“Their Spanish is phenomenal, and when you pair a student from Roosevelt, with a student whose Spanish is still emerging, then it’s magical,” Looney said. “I just see the students at UP wanting to emulate that pace of speech, that fluency, that mastery of vocabulary, and of course, the Roosevelt students have great admiration for UP students. They can inspire each other.”

Many of the students who take AP classes are heritage speakers, and the courses are geared at improving their academic skills in Spanish, Garcia-Velasco explained.

“There’s a key element, which has nothing to do with the academic component, and it’s their emotional connection to the material,” Garcia-Velasco said. “Because they have a strong connection with the language to start with, and I think there’s a lot to say about rediscovering yourself, your identity, your heritage.”

All of the students expressed their gratitude toward Garcia-Velasco for guiding them to see the value of being bilingual and to be confident about it.

“She helped us embrace what it means to be a Spanish speaker,” Frutos-Rodriguez said.

And now, all four of the students are majoring or planning to major in Spanish, a plan they had not considered a few years ago.

“It’s possible that they’ve experienced some instances where speaking Spanish, or having an accent, or having a hyphenated name, maybe has meant a disadvantage,” Garcia-Velasco said. “But they do understand, when they are in college, and they see that the language they love and the language of their abuelita or their parents, is held in a place of respect. I think that is a gamechanger.”

Dora Totoian is a reporter and the Opinion editor for The Beacon. She can be reached at totoian20@up.edu. 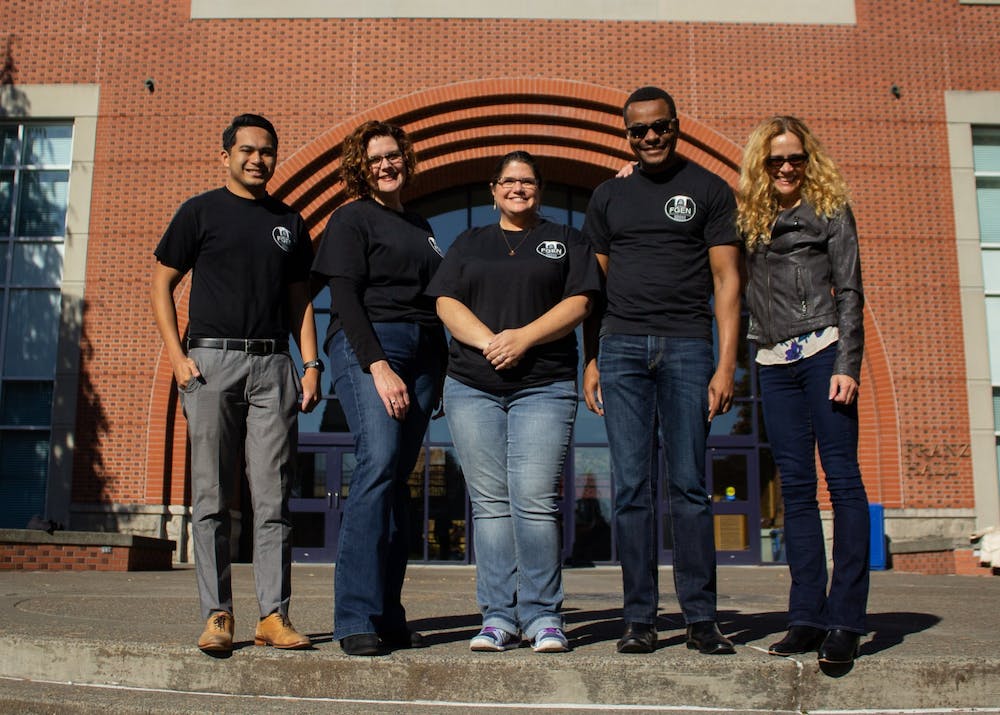