Fr. Claude Pomerleau started teaching at UP in 1991. He has since retired, but still teaches one political science class per year.

On Sept. 7 1986, Fr. Claude Pomerleau and three of his friends took a tour of the Andean mountains and parked their car on the side of a mountain just outside of Santiago, Chile. It was right near Chilean dictator Augusto Pinochet’s summer home.

On the drive back to the city, Pomerleau noticed rockets and bazookas sitting on both sides of the road. Ten minutes later, they heard on the radio that there had been an assassination attempt on Pinochet. The perpetrators planned to fire rockets at Pinochet while he was in his car.

“Fortunately we left 10 minutes before it took place, and we were driving down, and we heard about it on the car radio. There were four of us and they said there was an assassination attempt on the president,” Pomerleau said.

This is one of the many stories that Pomerleau uses to teach his political science classes to show how tense life was in Chile under the dictatorship of Pinochet. Pomerleau has been teaching at UP since 1991, starting as a political science professor and later becoming the department chair. He retired two years ago, but still teaches one class a year and remains a prominent member of the Holy Cross community.

For the past 10 years, Pomerleau has been battling two types of cancer including bone-marrow Waldenstrom cancer and soft tissue sarcoma. Although it bothers him at times, Pomerleau says he does not want to sit at home and wallow in his sickness. He would much rather be out and about, and make the most of his life. He continues to do everything he loves.

Pomerleau was born in Newport, Vermont in 1938  and is French-Canadian and American. He spent his childhood between Vermont, Virginia and Montreal.

Pomerleau received his undergraduate degree in philosophy from University of Notre Dame, and then went on to Rome to study theology at Gregorian University, where he was ordained into the priesthood in 1965. He received his PhD from the University of Denver in International Relations in 1975.

Throughout his career, Pomerleau has taught a wide range of political science classes including Western European and Eastern European, and African politics. Beginning in 1990, Pomerleau taught classes at the University of Chile on his time off from UP in the summers. He stopped teaching in Chile just last year. This semester, he is teaching the Politics of Latin America to a class of 11 students at UP.

Pomerleau said that he became a priest to teach and was especially attracted to the Congregation of Holy Cross because of its emphasis on teaching.

“Being a religious (member) of Holy Cross for me is following in the path of Jesus teacher,” Pomerleau said. “I think University of Portland for me is a good fit because (Chapel of) Christ the Teacher...and the emphasis has been on teaching. I have a bias toward Luke. He presents Jesus as a teacher and that is my model.”

Pomerleau’s devotion to teaching shines through in his close relationships with his students, past and present. Another professor of political science at UP, Gary Malecha, was one of Pomerleau’s graduate students at Notre Dame in 1977. He took European foreign policy and French Politics with Pomerleau.

“Claude is always an engaging instructor,” Malecha said. “Students really loved him. They were just marveled at him in a classroom. He had an exuberance and an energy back then, and he still does. Claude has taught thousands of students, and what astounds me is that he has been able to remember them. And the number of students who keep in contact with him, I mean that’s really amazing… and they’re all over the world.”

The two have a very strong relationship today, and share an office in Buckley Center.

Nick Owen, a junior political science and biology major, is currently taking Pomerleau’s Politics of Latin America course. Owen said that Pomerleau uses his personal experiences to teach his courses, as he's witnessed history first hand. Pomerleau tells stories ranging from hiding in someone’s house at night in Chile while there was a state-wide curfew, to the various meetings he’s had with ambassadors, senators and even presidents around the world.

“He also really seems like he cares, like the first day of class he was writing down things about us, our majors, where we’re from,” Owen said. “I’ve never had a professor do that, and this professor wants to know who we are and why were interested in this sort of stuff.”

Pomerleau took pictures of the students the first day and then took all of his notes and the pictures home to remember them. Students love this class and the way that Pomerleau uses his own experiences in Latin America to add another element. The most frequent stories Pomerleau tells are about his time in Chile.

When Pomerleau was in Chile, the country was under the rigid military dictatorship of Augusto Pinochet between 1974 and 1990. During Pinochet’s regime, the Chilean military took over St. George’s College, a Holy Cross school in the capital of Santiago that teaches the American equivalent of high school and two years of university.

After studying Spanish in Cuernavaca, Mexico, Pomerleau was asked by the Holy Cross community at Notre Dame to become the first rector of St. George’s College in Chile since the military had taken over. His job was to bring the school back to the Holy Cross ideals. He became the rector, which is like the president of the school, in 1985 and says that this is one of his proudest accomplishments.

“I took over a college that had been intervened by the military and it was near bankruptcy,” Pomerleau said. “It had been neglected. It’s major goals had been abandoned and I think the time I was there, it was really four years of intense work. There was always the threat that the military would come back and intervene, and some of my students were kidnapped and brought into jail and disappeared.”

Pomerleau also likes to tell his classes about his time in Uganda. After 17 years of teaching at UP, Pomerleau took a year off  in 2008, where he helped set up a masters program in international relations and diplomacy at Ugandan Martyrs University. The program was based on the Chilean model of education.

Malecha considers Pomerleau “a real renaissance man" because of his travels, different interests, the six languages that he speaks, his passion for teaching and love for movies and music. Through all of Pomerleau’s experiences and obligations, Malecha says that he’s always happy, which Pomerleau agrees with.

“I would describe myself superficially as a very happy person, who’s very happy with his life and is happy with the path he’s chosen,” Pomerleau said. “I have no regrets whatsoever, just grateful and really appreciative and grateful of everything that has come into my life, especially Holy Cross. Holy Cross has been a tremendous gift for me, in terms of support and guidance and inspiration.”

Holy Cross has been a very large part of Pomerleau’s journey and he continues to uphold its values. An important aspect of his life for the past 12 years is the Spanish mass that he gives every other Sunday at St. Alexander Catholic Church in Cornelius, Oregon. Last Sunday, the 800 seats of the church were nearly full when Father Claude showed up 20 minutes before the mass. The Hispanic community has taught him so much about the nature of his religion, and the importance of finding the divine in the small, meaningful things in life, Pomerleau said.

This community is not the only group that gets to enjoy Father Claude’s words. He has given the opening prayer at the United States Senate three times and once for the house session. Most recently, he opened the senate in May 2010. Claude’s sister, Marcelle, is married to United States Senator for Vermont, Patrick Leahy, who has been a senator since 1975.

Claude has also met and befriended many senators, ambassadors and presidents. He was close with Patricio Alwyin, the first democratically elected president after the military regime in Chile, because of his position as the rector of St. George’s college. He also met two-time Chilean president, Michelle Bachelet, through his brother-in-law.

Along with Pomerleau’s life in politics, he cherishes the close friendships that he has made throughout his life. Father Bob Antonelli, a retired UP archivist, has been best friends with Father Claude since they both started their undergraduate degree at Notre Dame. They also went to school in Rome together and got ordained together.

In the summer of 1957, Antonelli heard Pomerleau playing the clarinet one day during their first semester at Notre Dame in the dorm above his. Antonelli had played clarinet in high school as well and went to talked to Pomerleau when he heard the music coming from his room. They have been playing clarinet together ever since.

Another large part of Pomerleau’s life is his dedication to music. The Pomerleau family is very musical, and Pomerleau’s father was an opera singer. He played clarinet professionally in Chile, and in the River City Consort in Portland. Not only is he an a talented musician himself, Pomerleau is also an avid concert-goer. He says that he has season tickets to every music venue in Portland.

In addition to his passion for music, Pomerleau also loves to travel. He's been to Brazil, Chile, Mexico, Cuba, Argentina and Uganda just to name a few. Pomerleau has his own travel blog "Clod Hopping with Claude," where he talks about his travels to Latin America and the Caribbean.

“I remember he looked at me kind of quizzically and went ‘because I took your course, professor,’” Pomerleau said. 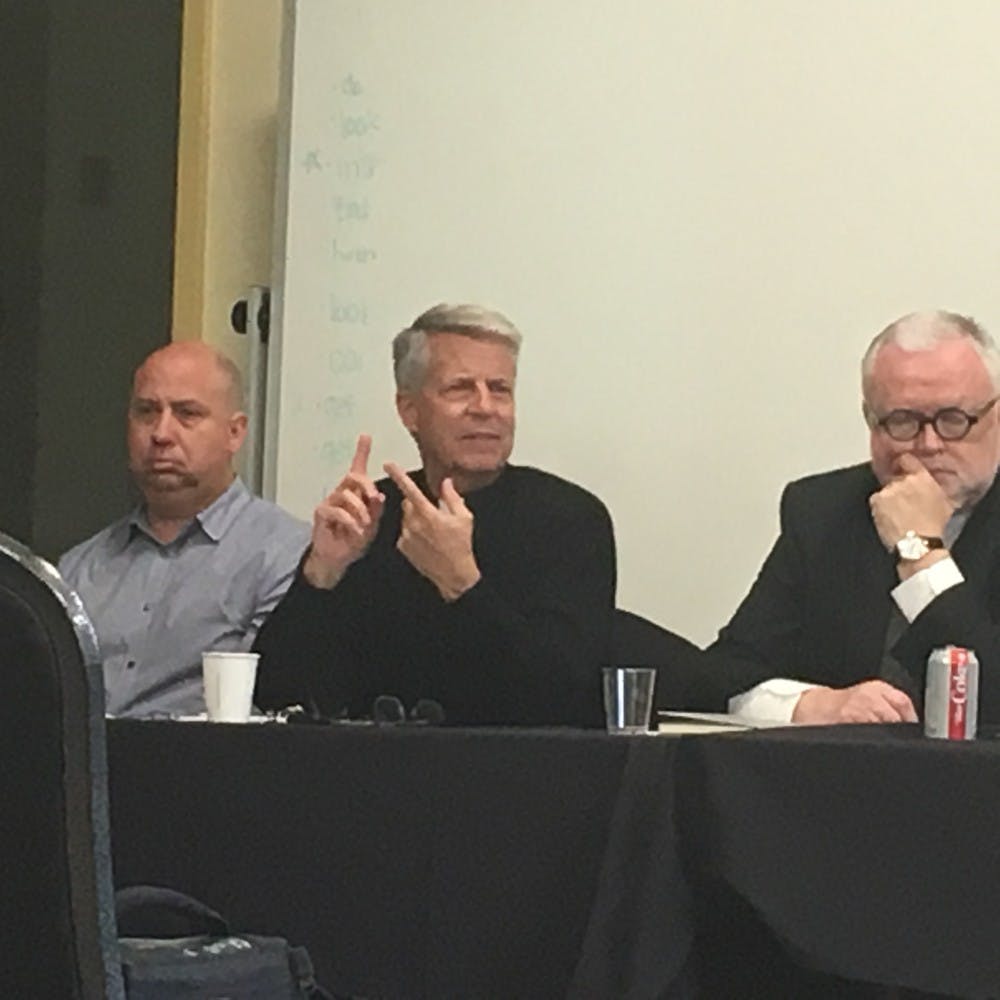 Poorman apologizes for his inaction, promises to do more