Professors bring community together to discuss institutional courage and betrayal

As the eyes of the nation focused on the sexual assault allegations against Supreme Court nominee Brett Kavanaugh, the UP community engaged in their own conversations about institutional responsibility in sexual assault cases last night in the Bauccio Commons.

Around 100 UP students, staff, administration and alumni gathered Wednesday for a campus forum, called “Building Courage UP,” to share perspectives on issues like sexual assault and discrimination, and the University’s role in reacting to and preventing it.

The event was designed as a follow-up to a lecture the previous night on institutional courage.

Around a dozen anonymous personal stories of sexual assault, stalking and harassment in the UP community were shared at the forum. You could hear a pin drop in the crowded room as students read the statements from current students, alumni and faculty about their experiences, and how they felt the University failed them when they reported what happened.

Stressed and horrified looks flashed across faces in the audience as they listened. The Beacon has agreed to not share the specific details of these stories at the request of the event organizers in advance. ASUP Vice President senior Michael Gallagher was one of the students who read another student’s story aloud at the forum.

“The full weight of what the statement said didn’t sink in until I was halfway through and I felt my heart drop,” Gallagher said. “I started tearing up. It was such a profoundly intimate experience to be able to express these concerns from another student through my voice.”

The narratives were collected as part of a survey sent out to students, staff, faculty and alumni by event organizers Sarina Saturn and Louisa Egan Brad, two psychology professors. Three hundred and eighteen people responded to the survey, 195 of which were current students.

The survey’s responses, which were shown by Brad to the crowd, demonstrated a distrust among students, alumni and some faculty regarding the University’s ability to adequately respond to cases of sexual assault, stalking and harassment.

The responses, displayed in bar graphs, showed majority student responses as “no” for survey questions such as: Do you think the University would apologize for what happened to the alleged victim of sexual violence? Believe the person’s report? Create an environment where this type of experience was recognized as a problem? Allow a person to have a say in how the report was handled? Ensure the person was treated as an important member of the institution?

After the responses were shared, former UP Health and Counseling Center employee Kristina Houck shared her experience as part of the team that launched Green Dot in 2010.

“I left three years ago because it was apparent to me that while there was a lot of passion around preventing (sexual assault and harassment), an increase in education and being the active bystanders that this University values being, there was not a willingness to really honestly look at our response processes,” Houck said.

Houck said she believes that true change at the University will not happen until UP invests in a full-time Title IX coordinator, with expertise in the field.

“I love this place,” Houck said. “The last time I stood in this room was near the end of my time as a staff person and we had a crowd of active bystanders who were committed to changing the culture… Everybody wants this to change, I believe that, and I have absolved myself of this university because I need it to change. Please students, hold them accountable.”

Chung told the audience about a friend she had in her college years, who was a victim of stalking, and how helpless she felt to help her.

“I really appreciated what Sandy Chung had to say,” said senior Lydia Heye. “It was really encouraging as a student to see that our Title IX program is in really good hands… Now more than ever I really am confident that real change is going to happen here.”

The event from the previous night featured a lecture where Jennifer Freyd, professor of psychology at the University of Oregon, presented research she had done about betrayal trauma and institutional betrayal. Freyd suggestions for how universities can address institutional trauma include:

Students Against Sexual Assault (SASA) co-Presidents Emma Covert and Shelby Gavigan, both seniors, presented suggestions about where the University should go from here.

“Recognizing that members of our community have been deeply wounded by our University at a time of vulnerability is crucial to having honest and open dialogue about the pervasiveness of sexual violence on our campus and in our society, and how we and our institution can do better,” Gavigan said.

Covert and Gavigan recognized the need for confidential and transparent support for student survivors, and shared their hope to bring an unaffiliated confidential advocate to UP.

“Though in the grand scheme of things this is a small and reactive step in trying to change the culture, it’s necessary nonetheless,” Gavigan said.

Professor Martin Monto, the original writer of the UP Green Dot grant, also felt that Wednesday’s forum was a good start in pursuit of this goal. He commended Saturn and Brad’s courage and vision for putting on such an event.

According to Monto, the University’s next step should be investing in education about what University students and officials should do in these difficult situations, and the best way to help survivors.

“I don’t think people realize how brave it was for Dr. Saturn and Dr. Brad to put on this event tonight, to be willing to stand up in front of the administration and point out these problems,” Alyssa Cole, a senior psychology major, said.

Editor’s note: The Beacon acknowledges that the term “victim” may have negative connotations. Because sexual assault is a crime and victim is the word Freyd used in her presentation, we have used the word interchangeably with “survivor” in this story.

Sam Cushing is news reporter for The Beacon. He can be reached at cushing20@up.edu. 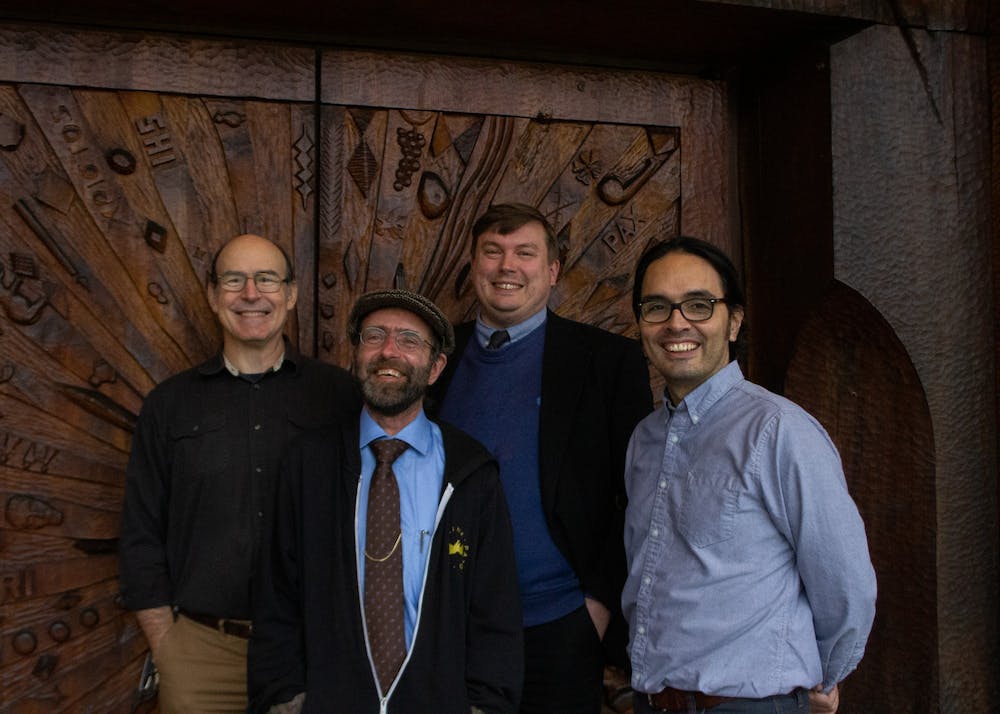 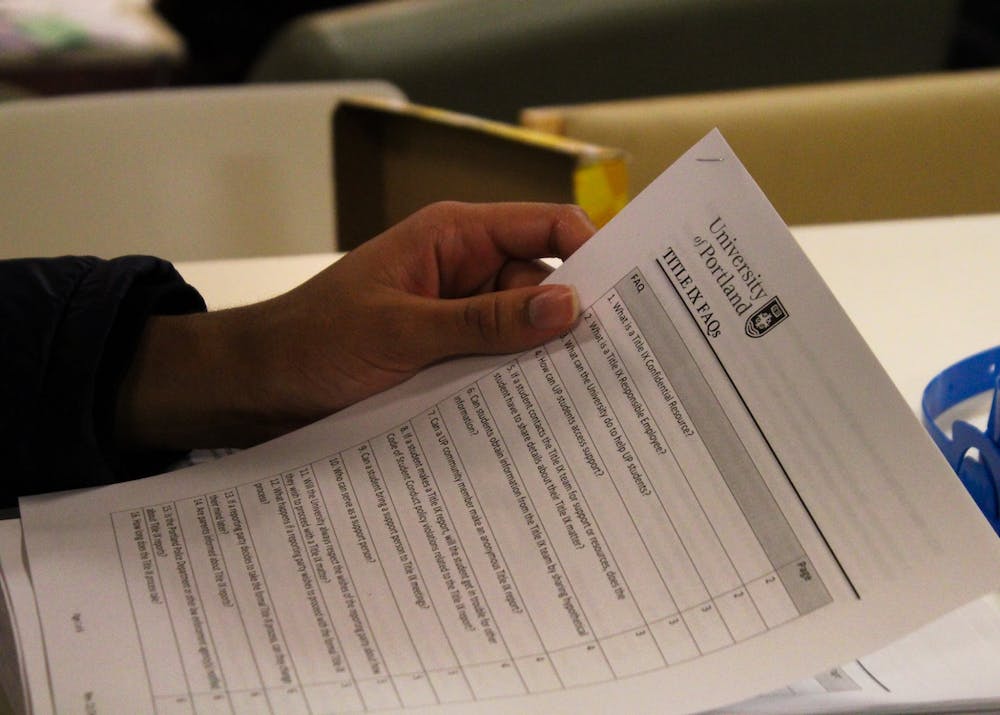 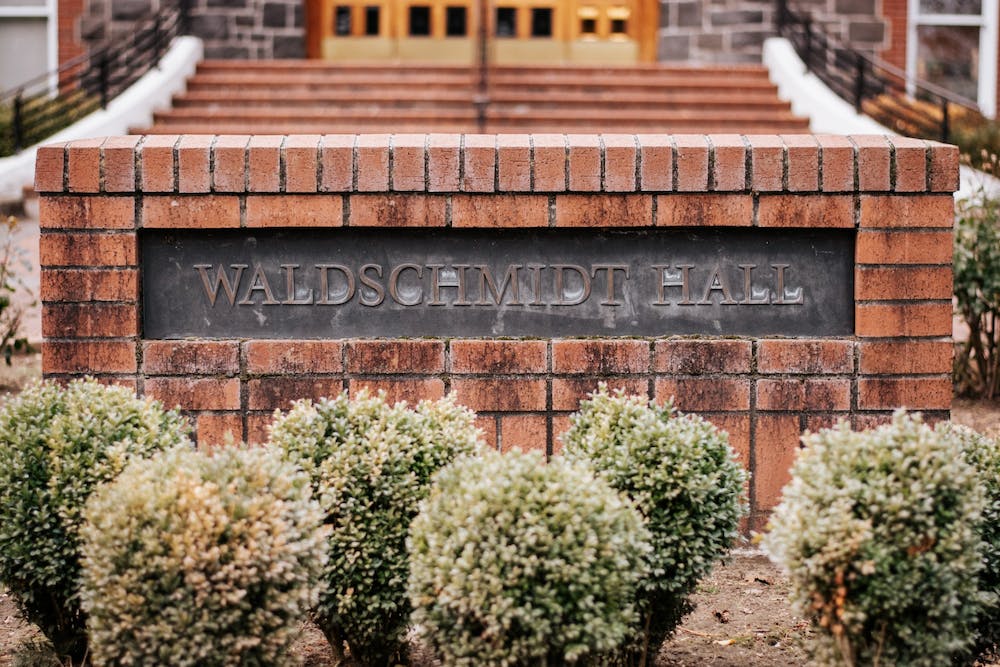