Several students at University of Portland continue to practice their habits of smoking or vaping. Under the new Oregon law, students under 21 are no longer able to legally smoke, vape, or buy the appropriate products for smoking and vaping.
by Annika Gordon / The Beacon

Before 19-year-old Matt returned to Portland for the spring semester, he bought himself about seven packs of menthol cigarettes because he thought that would be enough to last him the semester. He is from Guam, where the legal age to buy tobacco and other smoking products was 18 years old until Jan. 1 of this year when a similar law took effect. In Oregon, you now have to be 21 years old.

In Aug. 2017, the Oregon State Legislature raised the minimum age to buy, possess, or consume tobacco or inhalant delivery products from 18 to 21 years old. The law took effect on Jan. 1, 2018, impacting a handful of students at the University of Portland. As the Oregon laws change, students must change their previous habits to abide by the new law and campus policy.

The Beacon spoke to two students who are under the age of 21 and still struggling to adjust to the new law. As they are actively breaking the law, The Beacon has chosen to protect their identity. For the purpose of this article, we will refer to them as Matt and Adam.

The new law states that an inhalant delivery system is “a form that allows the nicotine to be delivered into a person’s respiratory system.” This includes products like vapes, hookah, and juuls.

Now underclassmen who regularly bought and used products are struggling to find other ways of acquiring them. Oregon is the fifth state, including California, New Jersey, Hawaii and Maine, to pass a law raising the minimum age to 21 years old. 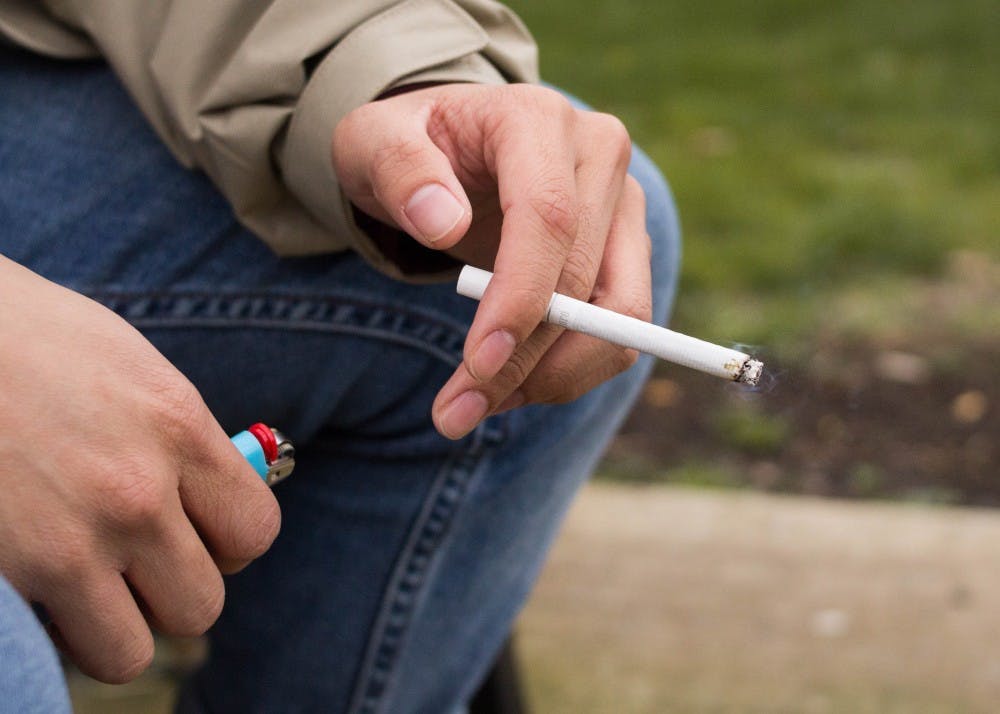 “Previously, our students who were 18-21 were permitted to use tobacco products,”Sarah Meiser, director of community standards, explained. “And people may struggle with ‘How do I stop doing that?’”

Not only has the law changed, but Meiser explained the UP smoking policy will also change in the next few months. Residence Life and Public Safety have been working together to draft a new policy that will include some new terms, like “inhalant delivery system,” and provide a clearer understanding of the legal age to consume tobacco products.

“We are still finalizing the wording of the new expectation to be in compliance with the new Oregon law,” Meiser said. “And we are in the works of adjusting our policy to prohibit tobacco products.”

Despite new smoking laws and University regulations, tobacco hasn't been completely banned on UP's campus like it has been at the University of Oregon  and Oregon State University. At UP, there are designated smoking areas with benches scattered throughout campus. However, smoking inside any of the university buildings is completely prohibited.

“The decision was made a few years ago to designate smoking areas for the benefit of non-smokers as well as those who smoke in our campus community,” Gerry Gregg, Public Safety director, explained in an email to The Beacon. “It provides them a location to smoke without annoying the nonsmoking members of our community.” 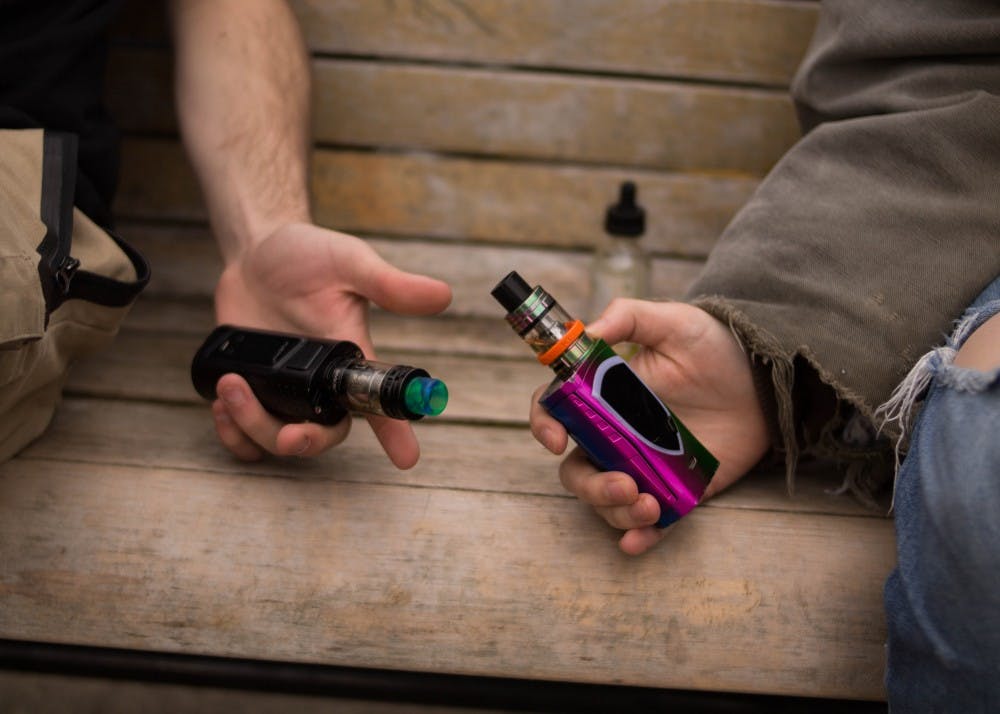 Despite the new law, Meiser said that Residence Life and Public Safety are not going to be out searching for students who are under 21.

“I don’t envision a time when Public Safety is patrolling the benches intentionally to card people,” Meiser said.

For some students, these smoking habits have been a part of their lives for some time, and may be difficult to change. Meiser explained though that the Health and Counseling Center may be a resource for students who are trying to live a tobacco-free life now.

“I started smoking when I was 18 and it was legal,” Matt said. “So I picked up the habit, and now the law has changed.”

Matt explained he prefers to use a vape, a common inhalant delivery system, though he does smoke cigarettes occasionally. Since he mainly vapes, the seven packs of cigarettes he brought back from Guam after Christmas Break should sustain him through the end of the semester since he only smokes them every once in a while. He said vaping is more of a “leisure” activity, and he does it out of a habit.

“If I ever wanted to relax, then I go for a cigarette,” Matt said.

Other students, like 19-year-old Adam from California, said he also prefers to vape over other tobacco products because it’s more casual. He explained that he doesn’t know a lot of people who smoke cigarettes, and he typically only sees people smoke them at parties.

Both students are under 21, meaning they now have to find other ways to get tobacco products.

“I have a fake (ID) so no problem there,” Adam said. “But a lot of my friends are scared that (tobacco sellers) are going to be on the lookout for them (fake IDs).” 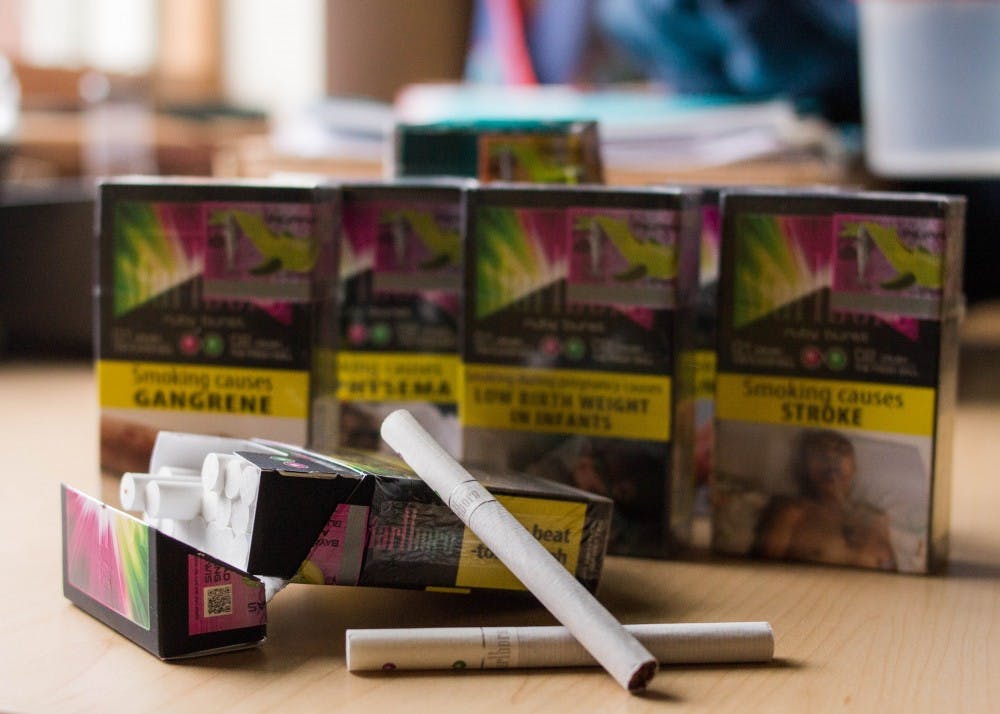 Matt said there are so many people on campus that are either 21 or have fake IDs that it won’t be hard for him or others to get more tobacco products when he runs out. He also has about six more packs of cigarettes out of the seven he brought from Guam.

And according to Jessica Wode, the housing coordinator at UP, over the last three years, 31 freshmen have indicated on their housing application that they are smokers (students don’t indicate after freshman year if they smoke or not). Of the 31 students, 29 of them are under 21. If these students want to continue using tobacco products, they must also find another way.

“I don’t think it will affect them that much,” Adam explained. “Especially in a college environment where a lot of people have fakes (IDs) and sometimes (tobacco sellers) don’t even card you.”