Barbershop on The Bluff

(Left to right) Jesse Persing, Kevin White, Kevin Hendersen, and Brad Henderse​​n practice in the basement of Mago Hunt. The Bluff Boys, UP's only barbershop quartet, is an elite group of singing hobbyists that love to share their passion for music with the community.
by Molly Lowney / The Beacon

While walking by the Christie Hall basement, senior engineering major Brad Hendersen heard the familiar sound of a cappella music. Curious, he took a look around, and noticed his friend, Kevin White, was the one playing it. They began to chat about their shared interest.

“I heard his background in music, we got off to a really good start there and had a common background interest,” said White, a sophomore mechanical engineering major. “We talked about starting a group.”

Though the idea for the barbershop quartet, The Bluff Boys, was conceived last year, the group was not formed until the fall of 2017, when Kevin Hendersen, Brad’s brother, arrived at University of Portland as a freshman. White and Hendersen soon found Jesse Persing, a sophomore mechanical engineering major also interested in a cappella.

“We got (Kevin) interested and, got Jesse into it and kind of hooked it all up at once,” White said.

From the brainchild of one conversation between acquaintances to a blossoming group performing at events across campus from “Belles in the Ballroom” to Christie Pub,  The Bluff Boys have been making their voices heard all over the University of Portland campus.

The Bluff Boys are now a performing collegiate barbershop quartet here at UP. The group consists of Persing singing tenor, White singing lead, and brothers Brad and Kevin Hendersen singing baritone and bass, respectively. They perform various events and pop-up performances all over campus and are gearing up for the Evergreen District Division Four competition in April in Eugene, Oregon. 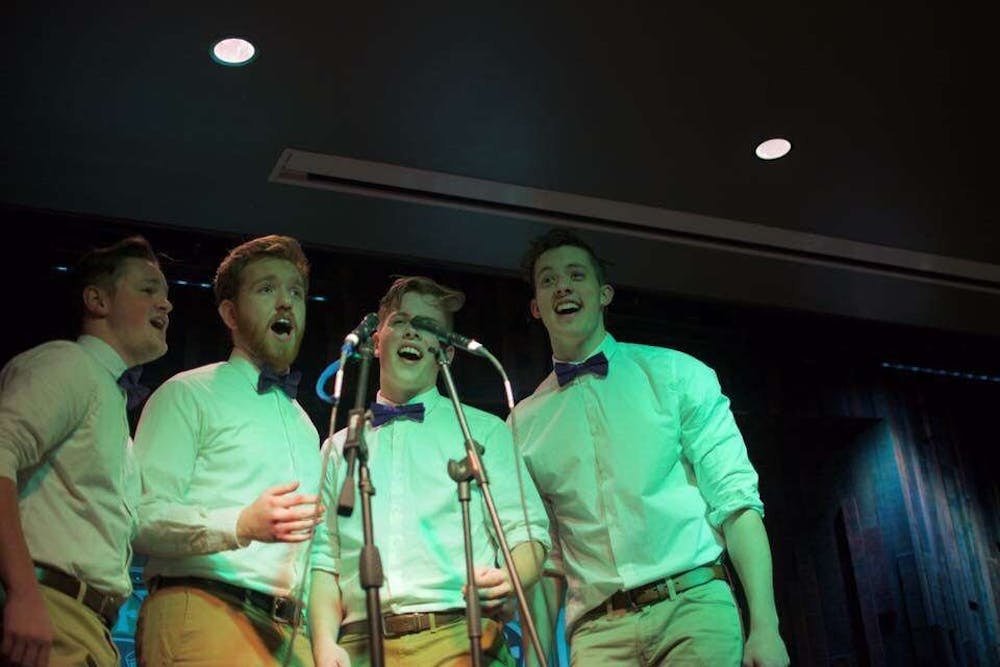 Though their weekly two-hour practices are filled with camaraderie, they take barbershop very seriously. Each song requires precision down to ringing each chord.

“I feel like it’s a lot more pressure that you have to deal with,” Persing said. “In a larger ensemble, you can be masked by a lot of other voices. But when it’s just four people, every mistake you make is so noticable. It really requires you to give everything you have into it to sing your notes correctly and have correct vowel shape.”

Though each song takes only a few weeks to learn well enough for a typical audience, it takes months for them to be competition-ready, according to Brad Hendersen. Even something as simple as song choice requires a great deal of thought.

“There's strict rules to what is contestable and what’s not,” Kevin Hendersen said, “We can sing more fun, recognizable songs that are outside of contestable rules at shows. We have our specific contest set, and we have songs that are not necessarily as polished and don’t have to follow the rules of barbershop.”

They have four songs in their repertoire, but hope to have six to eight performance ready by the end of the semester.

The quartet only needs to perform two songs for their first Evergreen District Division Four competition April 6-7 at Sheldon High School in Eugene. They have decided to perform one uptune and one ballad.

“If we were to win the international competition, we’d get medals and a lot of performance opportunities—but there isn’t a cash prize,” Brad Hendersen said. “We get clout.”

Each quartet gets judged on three categories: music — how it interprets the arrangements; singing — the quality of the sound itself; and performance — how it can convey emotion to an audience using facial expression and movement. Though the upcoming competition only had a six-judge panel, or two on every category, the international competition includes between 12 and 16 judges.

“A performance judge might not have a lot of knowledge of music theory, but will know what an audience responds to,” Brad Hendersen said. “A music judge knows a lot about music theory and what songs are contestable. A singing judge will be listing super closely to make sure we’re ringing every chord and have good tempo.”

They will be scored out of 100, and are aiming for a score of around 73 — the score they need to qualify for the district contest.

Barbershop can be an expensive hobby. To go to competitions, participants have to pay for entrance fees, accommodations and membership to the Barbershop Harmony Society, though Brad and Kevin Hendersen already have these from attending four international competitions with the society in the past. Though White and Persing do not have previous barbershop experience, they both have experience from numerous choirs, a cappella groups and musicals.

To help with this, The Bluff Boys performed Valentine's Day singing grams.

“It went really well,” Kevin Hendersen said. “It was a really cool experience to get to share our craft with others, and hopefully brighten up their day.”

Their current setlist includes “Mam’selle,” by Edmund Goulding, “Come Fly With Me,” by Frank Sinatra, “My Wild Irish Rose,” by Chauncey Olcott and “Heart of My Heart,” by Andrew Mack. The latter two are their Valentine’s Day songs.

In addition to competitions and Valentine’s day escapades, The Bluff Boys also perform at the Christie Pub. Brad Hendersen described their debut performance at “Belles in the Ballroom” as a successful experience.

“It was our first formal performing experience,” Brad Hendersen said. “Then it kind of snowballed from there, because we got a lot of really positive feedback from people I respect a lot in barbershop.”

They plan on performing around campus and said they are open to any events or gigs for anyone who contacts them.

“As a group, we’re really excited to get started this year, excited to see where the future takes us,” White said. “If you want to reach out to us we’re willing to offer our services for any events.”

Q: What is your favorite part of being in “The Bluff Boys” ?

Jesse Persing: “My favorite part about being in The Bluff Boys in that we get to express our creativity in ways that I wasn’t able to do in University Singers. I’ve always loved barber shop, I started listening to a bunch of groups in high school. It’s just always something that I’ve really loved to do. It’s a good outlet for me.”

Jesse: “I would say, practice. A lot of practice. That how I got into it, and you just listen to a lot of music. I love music it’s one of my favorite things in the world. Just don’t stop trying.”

Q: How are you going to continue music after college?

Jesse: “I’ve always had this dream to sing in jazz clubs. Not sure if that’s going to happen but it’d be really cool. Other than that, I plan on singing in ensembles and just other community groups outside of college.”

Q: What is your favorite part of being in “the Bluff Boys” ?

Kevin: “My favorite part about being in The Bluff Boys in not only the community we create but the feeling we portray, not only within the group but to others.”

Brad Hendersen: “I started singing in boys choir when I was six. I did barbershop in the same group as my brother since I was 14. We’ve competed internationally four times, won the Evergreen District Chorus contest five times—and thats all of the Northwest. Now I’m in the Bluff Boys. I was also in the musical at UP last year, ‘Jesus Christ Superstar.’”

Q: What is your favorite part of being in The Bluff Boys?

Brad: “Camaraderie, competition, and performance. I’ve always wanted to be in a barbershop quartet, especially with my brother, and there’s some pretty cool competition opportunities. Also, there's a lot fewer opportunities for male camaraderie after college, and I think barbershop is really cool way to bring people together. We always had a diverse group of people, and it was an opportunity to learn about other people’s experiences.

Brad: How are you going to continue music after college?

A: “I’m going to sing with the Senateaires again, and hopefully keep competing internationally with the Bluff Boys for as long as we can.”

Kevin Hendersen: “I started singing with boys choir when I was seven, because the rest of my family had been singing from that age as well, and it was just kind of something we did. I got into barbershop when I was 11, and I was and still am in a competitive choir in Salem—we placed 5th in 2012 in barbershop in the international competition.”

Kevin: “Listen to a lot of music, and try to find people who like the same music and are interested in making that type of music. It’s kind of just generic, but that’s what’s worked out for me.

Q: How are you going to continue music after college?

Kevin: “It’s going to continue to be a hobby. I don’t think of it as any sort of professional career for me, I’m not trained in it, I’ve just done it through experience and learning through other people.”