News > Muslim women answer: 'What does the hijab mean to you?'

Muslim women answer: 'What does the hijab mean to you?'

The hijab is a head covering, generally a veil or a scarf, worn in public or in the presence of non-familial adult males by some Muslim women.

The hijab is an often misunderstood religious and cultural symbol and custom. It's also a visual representation of a woman's religious affiliation at a time when, according to the Center for American-Islamic Relations, there are even more crimes against Muslims today than there were shortly after the Sept. 11, 2001 attacks. Some have also felt threatened by President Trump's attempt to ban immigrants from several majority Muslim countries, and the increasing prevalence of alt-right news site Breitbart.

Several Muslim women at UP told The Beacon that although there are few people on campus who wear the hijab, they rarely get questions from other students about the custom. So we invited them to answer, in their own words, "What does the hijab mean to you?"

Here are their answers:

"The word 'hijab' means 'to cover'. And it’s usually that girls wear it to preserve their beauty, so not everybody gets to see it. I wear it because I feel like it sort of protects me. It’s who I am, it’s a part of me now. Sometimes when I feel like I want to try to take it off and walk outside, I feel like I have no head on. It feels really weird. 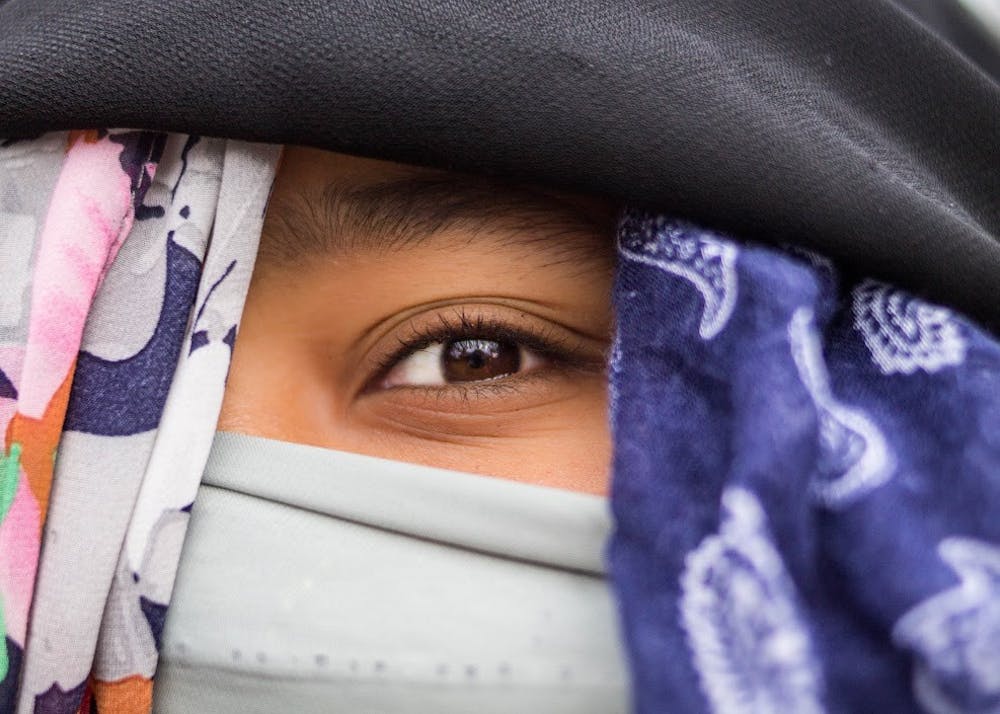 I remember once, I was walking around the streets and this random guy came up to me and started screaming in my face, 'You have to believe in Jesus!' I thought you don’t force your religion on someone else.

So people, they fear me for some reason, they fear I am going to do something to them. Another time, I was in a movie theatre once and the people in front of us saw us coming and they left. It’s like they fear me because I look different. But just because I look different doesn’t mean I’m going to harm you or anything. You should look at someone from the inside, you shouldn’t look at what someone looks like from the outside, because that’s really not important."

"First and foremost, it is a religious thing. It is a religious commandment, it’s something that God has directed us to do, but there is also that personal element. For me, I wear it because it’s kind of like a reminder of my identity as a Muslim, it’s a constant reminder for me of what my character should be like as a Muslim, what I stand for as a Muslim woman.

It’s kind of like empowerment for me as well. Just as a woman has the right to show her body, she should also have the right to cover it. That’s a big thing for me.

I actually started to wear it when I was about six years old, and that was a terrible time to start wearing it, because that’s when 9/11 happened. There was so much chaos going on with Muslims in the United States. So when I first started wearing it, my mom was like, 'Are you sure you want to do this?' I was only six, and I was aware of all of that. People are always shocked to hear that.

It was the first time I’d ever heard the word “terrorist” and I didn’t understand what it meant, so I went home and asked my mom. I was like, 'Mom, I was called a terrorist today by another student, what does that mean?' It was difficult learning that at such a young age, but somehow I still wanted to wear the hijab, I kept it on. But my mom literally always gave me the option.

"My understanding of it is that the hijab is worn for modesty reasons, so people could judge you based on your character and who you are, rather than what you look like. So, hijab is not only what you wear on your head but how you carry yourself.

It doesn’t really get hard, but I guess sometimes, when you want to run out of the house, it’s like, 'Oh wait, I have to grab a scarf.' Or when random men show up at your house, you have to grab the nearest piece of cloth and toss it on your head.

And with the whole Trump thing, there’s Islamophobia. I haven’t experienced it, but I know there are bouts of it where you’re wearing the hijab and people judge you because they think you were forced to wear it, or that your family made you wear it, because of the way it’s portrayed in the media.

I feel like by the time you enter college — like in seventh grade, you learn about major religions, so most people when they come to UP have learned about it. So I haven’t had anyone here ask any really ignorant questions and I don’t know if that’s good or bad — maybe people are afraid to ask, or they might already know, or they could have seen other people doing it, or they just already have preconceived judgements. So I haven’t gotten any of those questions here, though I have gotten compliments on it! Though I wouldn’t mind answering those questions for people, too."