REVIEW: Two Murders, two Songs and a talking dog: ‘The Moors’ is a killer good time

Hannah Harrison as Huldey and Drew Jones as The Mastiff.

Photo courtesy of Andrew May.

‘The Moors,’ directed by Jenna Sulecki from a script by Jen Silverman, begins with an exclamation point — a bird slamming into a window — though it could just as easily be a question mark. The characters remark that this is not the first time a bird has been killed by their windows, but as the audience bears witness, the death feels like an omen.

After the bird hits the window, a young governess arrives in the “savage” landscape of the moors to change the lives of two sisters. At the same time, a moorhen flies (maybe falls) into the life of the sisters’ large mastiff dog.

The performance took place in the always welcoming Mago Hunt theater, of course, on a sparsely furnished stage: only two stools, a chair and a table. The minimal set dressing perfectly sets up a running gag for the governess Emilie, who finds every room in the house looks like the parlor. On the floor of the stage were letters or journal entries.

Both forms of writing are integral to the plot in some way and called to mind the Brontë sisters, whose lives and legacies served as inspiration for Silverman’s central sisters Agatha and Hudley. Above the stage were hung paintings of the desolate English countryside, one character describes the moors as “a savage place,” full of ravenous birds, quicksand and starvation.

The desolation of the moors is contrasted with the character’s interior lives, yet the storminess and desperation is reflected there too. The characters all talk past or over each other. A lot of the dialogue is questions or trailing sentences that are only completed with further questions.

The questions concern the characters themselves and their place on the moors and in wider society. What do they want in life? What do they want from each other? What molds have they been put in and how do they break out? All this in forlorn hope that they will be visible to someone, familiar feelings to women in the 1840s that find resonance even today.

On the whole, the play is as comedic as it is tragic and has a fair share of twists and turns. In lesser hands, the tonal whiplash might threaten to rip a story apart but Selucki wields her actors with such precision and an eye for detail that the tonal shifts often go unnoticed, as they seem entirely natural.

For example, in one of the play’s more affecting scenes, Emilie, the newly arrived governess who has been duped into coming to the titular moors, sings a sullen lullaby as the rest of the cast takes a moment to consider the scenery and their interiority. Each character’s gaze feels considered and emotive, each glance is charged with some hidden feeling. The moment also gives Shae McCarty, who plays Emilie, the opportunity to flex her chops on the autoharp, which is always appreciated.

Olivia Sloss’s Agatha is domineering with a pervading sense of elegance and poise that seems lost on her roommates. Sloss plays cruelty tinged cunning lavishly. Hannah Harrison plays the needy and ambitious Hudley, who aspires to a literary fame once again evocative of the Brontës. Her attempt at fame comes in the form of one half the play’s murders as well as the other half of its songs. This time though the song is less a lullaby and more a speaker-shaking anthem to misbehaving. Naturally, the murder weapon is used as a microphone.

Channeling the confusing rooms of the mansion-on-the-moors, Alexa Bayliff plays the odd dual role of Marjorie, the scullery maid afflicted with Typhus, and a pregnant parlor maid Mallory. The two characters are one in the same, but the name changes whether she’s in the scullery or the parlor. Bailiff plays this for a comedic effect that has layers of obscured intent. McCarty’s Emilie might be able to lull a child to sleep but her occupation doesn’t define her; she projects a fragility that conceals a fair amount of cunning and agility. She may have been confused at first, but finds a place on the moors that suits her.

ASUP vice president Drew Jones’s Mastiff is prone to poetic soliloquies and he, like the others, suffers under Agatha’s cruelty. Snoopy this is not. There is a Woodstock, though, in the form of an anxious Moorhen, played by Hannah Kelly. Oddly enough, Kelly’s nervous bird serves as a love interest for the demure dog in a romance that is easier to believe when you see it on stage, sold with two lovely performances.

All of these elements, the mystery, the tragedy and comedy, the talking dog, made for an entertaining and rewarding evening at the theater. ‘The Moors’ wasn’t one to miss. 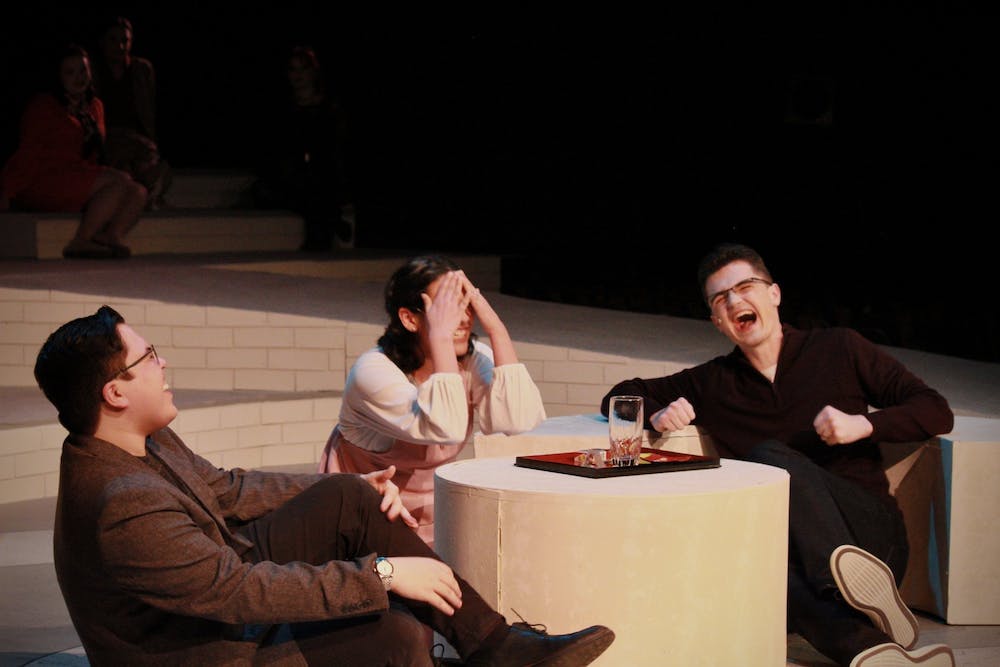 Going Out with a Bang: Seniors Reflect on “Company”