UP's athletic facilities rest, unused during their season off.

Cross country and track and field runner Victoria Weir spent this summer in Plymouth, England watching her fall plans being completely derailed due to the COVID-19 pandemic, a European travel ban and the postponement of all fall sports.

Even though Weir was able to return to the University of Portland, it wasn’t the welcome back to The Bluff she hoped for. Weir was expecting in-person classes this fall, so UP’s decision to hold classes online came as a shock to her.

“I thought we were going to come back,” Weir said. “Especially because they had such big plans in place for us to be back and it seemed like they had a strategy that we could come back and socially distance.”

Weir is one of many student-athletes who have spent this year adapting to the loss of one of the biggest parts of their college career. The Beacon talked to fall sport athletes Weir, Caua Soares and Liz Reich about the ways COVID-19 has changed their school experience, what they miss in their normal routine, and how they’re spending their time outside of practice.

Weir, a graduate student pursuing an MBA in nonprofit management, was disappointed by the news about fall semester but she thinks it was the right decision for the safety of the students.

With the move to online classes, Weir thought a postponed cross country season was inevitable this fall. She said that the track season’s abrupt cancellation last spring came as much more of a shock.

“I think we were more disappointed when (track) got canceled,” Weir said. “We’d been training for track quite hard up to that point and then it was all very sudden.”

Weir wishes the season wasn’t postponed, but the time without competition has reminded her why she loves running so much. She’s been able to focus on doing what she loves without the added pressure of competing.

“We’re still running every day but we don’t have the pressure of having to race fast or be the fittest in our lives,” Weir said. “A lot of us have realized that we really enjoy just running and what it does for our minds and bodies.”

Some of Weir’s favorite memories with the cross country team are attending meets, but the thing she’ll miss the most this season is getting to spend time with her teammates.

“You see each other all the time, you go and eat lunch and dinner together,” Weir said. “We would be in the locker room and we would have a laugh as you’re getting ready for a workout. It’s the small things that you wouldn’t really think about that I’ve realized I miss with the team.”

This semester has given Weir more time to explore some of her hobbies again. She’s been reading classics by Jane Austen and Anne Brontë, and novels like The Road, Gulliver’s Travels and The Book Thief.

Compared to many other athletes that rely on a lot of gym time for training, it’s been easier for runners like Weir to integrate socially distanced practices in their routines. The forests and parks near campus are her favorite places to run.

When Weir came to the US, this wasn’t the study abroad experience she had envisioned. She chose to run for UP for the chance to compete against some of the best runners in the US. Weir’s unsure what will happen at the end of the season, but she would like to return to UP so she can experience a full year competing.

“The NCAA for track and cross country in the US is another level to what it’s like at home,”  Weir said. “The reason I came was to really gain that experience of competing with some amazing runners. If I have the opportunity to have that experience next year then I would consider taking it.”

Caua Soares, a senior operations and technology management major, was hopeful that the team would get to see a fall season with fans in the stadium. Despite the change of plans, Soares is thankful for all the support he has received from the athletic department.

“They have been supporting us in any way that we need, testing us, asking about our mental health, and talking about the issues that are going around,” Soares said.

Even though competition is currently postponed, Soares is still busy with practice and schoolwork. Soccer practice looked different at the start of the semester, with more passing and shooting drills and less contact play.

Soares tries to keep a healthy balance between school and sports and not spend too much time playing video games or binge-watching Netflix. Soares has used his free time to learn how to cook and try out new recipes he’s found on the internet.

“I definitely have been cooking more, so I have been paying more attention to what I eat and looking for new recipes,” Soares said. “I made a cream cheese pasta with steak. I’m vegetarian now, but it was amazing. I cooked the steak in a cast iron that I got a couple months ago and I used mozzarella, gorgonzola, and parmesan...It was super simple and delicious.”

Soares has found it difficult adjusting to online learning. He is grateful, however, that the lessons he has learned from being on the soccer team have carried over into other areas of his life.

Elizabeth Reich, a senior environmental ethics and German major, braced herself for the news that she wouldn’t be competing this semester. She’ll miss the routine that comes with being part of a team.

“I miss seeing everyone everyday and knowing what’s going on in everyone’s lives and having that little sense of family.” Reich said.

Practice offers Reich a nice change of scenery from online classes. Since Reich is unable to spend as much time in the gym this semester, she’s gotten more familiar with Portland.

“I’m seeing this season of Portland for the first time,” Reich said. “Usually I’m spending so much time in the gym during the fall.”

With her newfound free time, Reich has fixed up a bike to explore Portland with and has created quarantine goals, like doing a handstand a day, getting better at yoga and trying to touch her toes, to help pass the time.

“I’m doing online yoga classes and YouTube videos like the BeachBody workouts,” Reich said. “It’s been kind of fun trying to do my own thing, attempting my new workouts, but I do ultimately miss that routine.”

Reich says that if the whole season is cancelled she would love to play at UP again, however, she needs to see how the rest of the year plays out.

“I would love to play,” Reich said. “If this season gets canned all the way I would definitely want to reuse that last year (of eligibility)...It’s kind of up to the university if they can afford to keep athletes around. I’m assuming this year that there will be a large coronavirus transfer pool of kids who want to do that, but of course I’d love to play again at UP.” 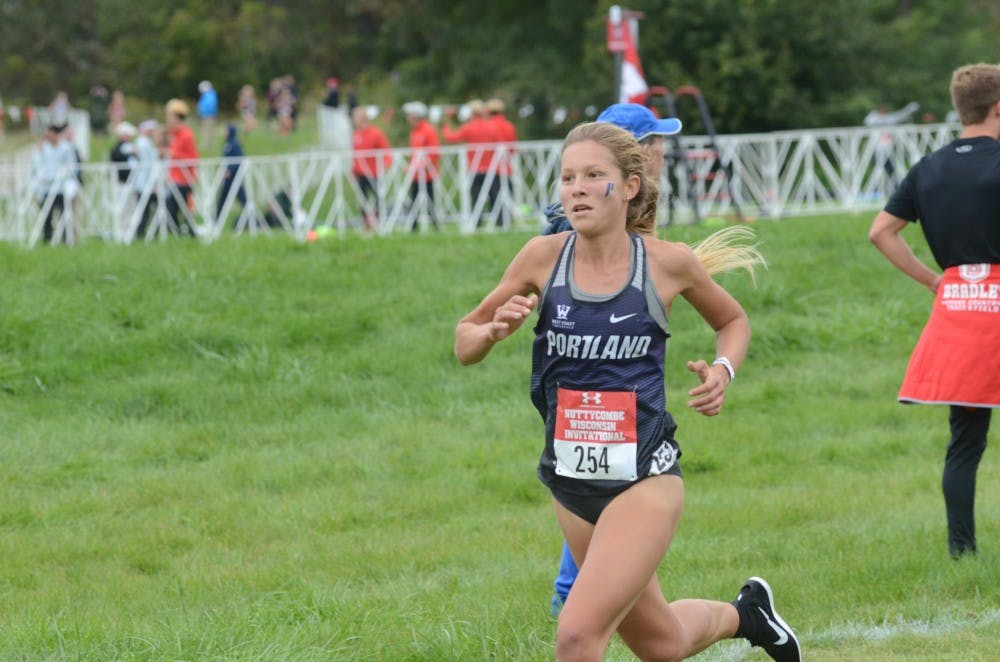