A typical Sunday morning on The Bluff is characterized by the bustling Bauccio Commons. It’s full of sleepy weekend warriors, students fueling up for a full day at Clark Library and people heading to or just returning from Mass.

Sunday mornings look a little different at the UP Center in Salzburg, but, like their UP counterparts, many Salzburgers have adapted their faith practice to life abroad, and are using it as yet another way of experiencing the new culture.

A student-run “Spirituality Group” was established at the beginning of the school year to foster spiritual enrichment (regardless of religious affiliation) among the Salzburgers. According to sophomore Megan Launceford, the group’s leader, they hope that the groups will provide spiritual support for Salzburg students.

Already the group has begun to hold weekly Bible study and yoga practices, as well as organizing trips to various Salzburg churches on Sundays. They also inviting students to the Center’s periodic Masses. The Spiritual Group also looking to lead a pilgrimage of Salzburg in the near future.

“I think coming together as a group definitely creates a sense of unity for those of us who are especially spiritual,” Launceford said. “It makes you feel like you have more people to lean on here if something happens back home, or if you’re missing people from home.”

The majority of  Salzburg Masses are celebrated in German, and a favorite place of attendance among this year’s UP students is at the historic Dome Cathedral in Old Town, Salzburg.

Many of the Salzburgers also attended a French Mass at the Notre Dame Cathedral while on a group trip to Paris. Despite the language barrier, these experiences gave students the opportunity to learn how structural, musical and other aspects of liturgical worship differ throughout various countries.

“The Masses are in German, so that’s definitely different, but I think it’s cool because people always say that Catholic Masses are universal, and you don’t really experience that until you’re in a place where you don’t really understand the language,” Launceford said.

Sophomore Emily Pellatz, another member of the Spirituality Group, regularly attends Salzburg’s Calvary Chapel. The Calvary Chapel in Salzburg is a non-denominational Christian church that worships in both German and English. The chapel was founded in 2008 by a pastor originally from Salzburg who moved to Seattle, Washington.

A member of the Portland’s Calvary Chapel for many years, Pellatz’s parents connected her with its sister community in Salzburg, which Pellatz said helped her adjust to the challenges of living abroad.

“The community there is beyond welcoming. It’s a mixture of all types of people - there are Austrians, Koreans, Spanish members and Americans,” Pellatz said. “It’s helped intensify my faith over here, reminding me of what my beliefs are already, and trying to apply them to this study abroad situation.”

For sophomore Salzburger Cheyenne Schoen, being abroad provided an opportunity to develop her faith practice in a way that is more independent than at home. Travel itself, too, has provided Schoen and others in the group experiences for spiritual enrichment.

“Being on top of the Untersberg [Mountain] has been the most striking faith experience for me so far,” Schoen said. “You look down and you can see Germany and Austria. Being able to see the landscape, and being able to see the giant cross at the top, something about it made me feel closer to my faith.”

Clare Duffy is a sophomore communication currently studying abroad in Salzburg, Austria. She can be reached at duffy17@up.edu or on Twitter @claresduff. 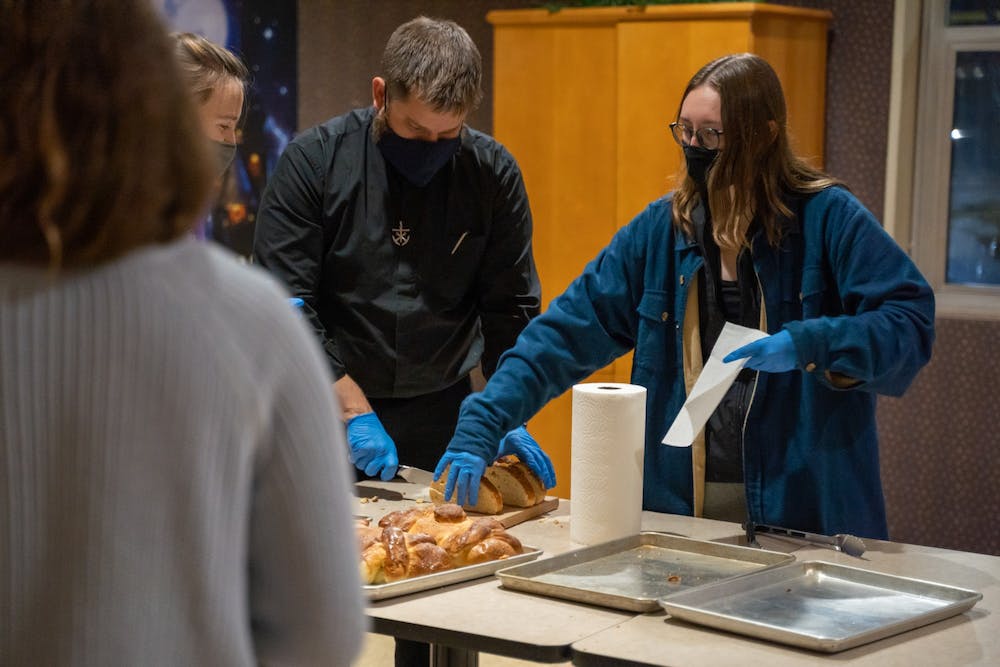