By Janea Melido | September 26, 2022 2:36pm
Dr. Robert Kelly was Inaugurated into office on Sept. 23 as the President of the University of Portland
Media Credit: Riley Martinez / The Beacon

UP President Robert Dwayne Kelly was inaugurated on Friday, Sept. 23 as the University’s first lay person and Black president. The day consisted of an Inauguration Mass, a ceremony and a dance.

Starting off at 11 a.m., Mass took place in the Chiles Center, where Kelly’s family, friends, colleagues and the UP community gathered in prayer to welcome the new president.

Many of those who personally know Kelly, flew in from out of state to witness his inauguration and celebrate his successes.

“Dr. Kelly is a wonderful human being and is probably one of the most down to earth professionals in higher education,” NASPA representative Stephanie Gordon said. “Students should know that they’ll be able to get to know him as a person as well as a professional.”

Following the Mass, the Inauguration ceremony took place in the Chiles Center at 3:15 p.m. The event commenced with Provost Herbert Medina welcoming the attendees.

Several speakers took their place on stage to share a few words to welcome President Kelly. There were greetings from the Archdiocese of Portland, the commissioners of Multnomah County and the city of Portland as well as many more.

President Kelly was also presented with gifts which are symbolic of the University and his position. Gifts include: The president’s chain of office, a symbol of the authority of the President and the unity of UP’s diverse communities. A mace that was commissioned in honor of Br. Godfrey, a president’s prayer and a newly crafted university rosary were also gifted.

Kelly’s wife, Bridget Turner Kelly, followed the presentation of gifts with her own remarks, which touched on how since she’s met him, Kelly has been visionary and completes what he sets his mind to.

“Rob told me when we met back in the late 1990s that he wanted someday to be a college president,” Turner Kelly said in her speech. “Then I watched him over two decades making that vision a reality. He prayed, he sought spiritual direction, he worked in positions that would give him proximity to college presidents and he persisted.”

As his wife spoke, an emotional Kelly was seen wiping his tears away from his face.

“I was moved by all the speeches, especially by Dr. Kelly's wife,” ASUP President Emma Fuller said. “It was so cool for her to talk through their journey together and how he got where he is ... But it was the best thing ever. Very tear jerking.”

Former Presidents Rev. E. William Beauchamp and Rev. David T. Tyson were a part of the ceremony during the commissioning prayer. Beauchamp and Tyson, along with the rest of the audience, raised their left hands to rest on Kelly as a way to bless him into his presidency.

As Kelly was officially inaugurated, students shared their thoughts on the events and hopes for the future with The Beacon.

“I thought it was really interesting to hear all the different speeches and hear what an amazing man he is,” senior William Heyler said. “I just wanted to witness that event firsthand for myself.”

Concluding the set of speakers was Kelly’s own inaugural address, a speech that focused on the University being a beacon in the world.

To end the day in celebration, the Academic Quad was transformed into a dance floor with a live cover band’s music echoing throughout the campus. Kelly and his wife were greeted with attendees lined up blowing bubbles at the entrance to welcome them in.

The dance floor quickly filled with students, staff and friends of President Kelly, with him, his wife and kids centered in the middle, celebrating the events of the day.

Janea Melido is Copy Editor for The Beacon. She can be reached at melido24@up.edu

Carlos Morena Vega contributed to this story. He can be reached at morenove23@up.edu.

Charlie Rogers contributed to this story. He can be reached at rogersc24@up.edu. 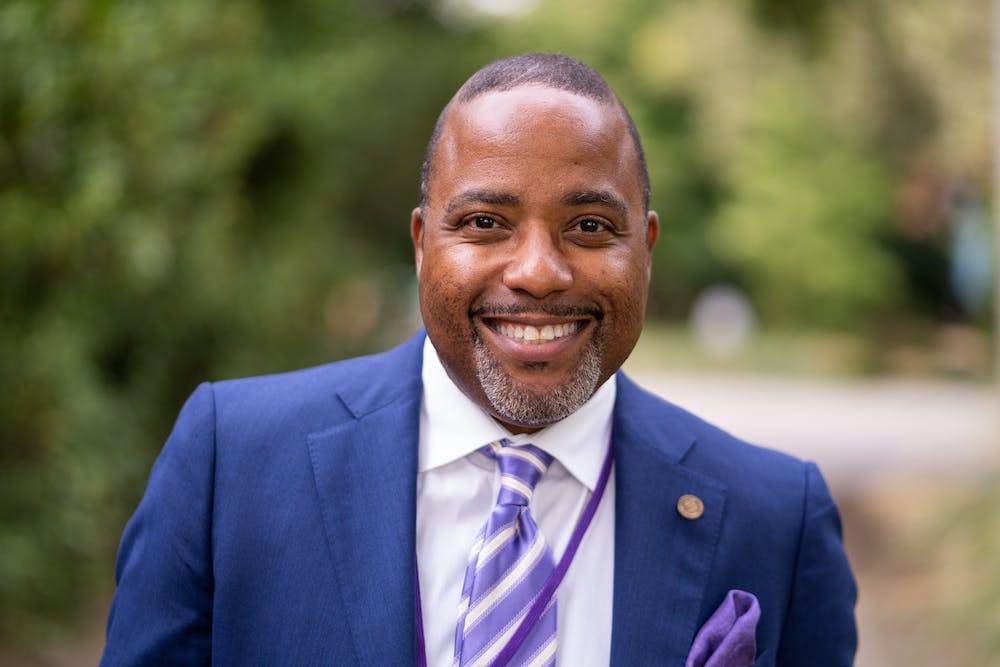 Fostering growth and building community: President Kelly and his passion for people