By Kyle Garcia | November 3, 2019 10:42pm
Virag Weiler and Anna Pataki both run for UP's cross country and track teams. They met and became friends while running for the same club in Hungary and sometimes competing against each other.
Media Credit: Annika Gordon / The Beacon

Graduate student Virag Weiler and redshirt sophomore Anna Pataki aren’t used to running in big groups. The two runners hail from Hungary, over 5,600 miles away, where they would train either by themselves, or with one or two other people.

But here at the University of Portland, they’re training with a team of 27 people almost every day of the week.

“It gives me a lot of motivation,” Pataki said. “I think it’s so good that we are always doing the workout together. We can motivate each other and support each other.”

It’s just one of the many adjustments that Weiler and Pataki have had to make during their time at the University of Portland. But it’s something they’ve grown to appreciate as the 2019 cross country season starts to ramp up, with both runners expected to be major contributors.

The two runners met running for the same club in Budapest, KSI SE. They competed against each other for years but became teammates in college after Pataki came to Budapest from her smaller city of Miskolc.

Sports have been part of Weiler’s life since she was 2 years old. She started swimming when she was 6 and running when she was 7. More sports came after that. At 15, after realizing that five sports might be just a little too much, she decided to focus on running.

However, it’s not just regular cross country running that she’s interested in. Weiler also does plenty of orienteering running, which entails trying to find your way through the forest with nothing but a map. The runners have to use the map to reach certain control points from the starting line. After you reach those control points, you win the race.

“It’s just a lot of fun to be in nature and just run and use your brain at the same time,” Weiler said. “People can think ‘So it’s just like some hiking so it’s not that serious’ but there are some orienteering running, especially girls, but there are some boys who have qualified for the Olympics in the 5K or 3K, steeple. There are some really good runners also.”

Pataki started running around 10 years old. She had previously done kayaking for three years but found that it wasn’t really her speed. Her father told her that she had to do something else if she wasn’t going to pursue kayaking, so she went to her local track and decided she wanted to run.

Weiler has been on The Bluff for a year already. She contacted multiple running coaches after graduating from Budapest University of Technology and Economics with a math degree, including Portland head coach Ian Solof. According to Solof, Weiler reached out to him, interested in running and studying in the U.S.

That led to several conversations via Facebook messaging, Skype, Facetime, any way they could so that Solof could get a feel for how Weiler would do as an athlete and a student. Solof felt good about Weiler, and decided to make her an offer to come study and run at the University of Portland. It was an offer Weiler felt she couldn’t refuse.

“I was really surprised in the beginning that I can go to the U.S. to study there, and I can get a scholarship there,” Weiler said. “I didn’t feel that I’m that good, but then I was like, that’s such a good opportunity and I have to go there and see how it is. Just get to know another culture.”

Last year, Weiler was vital to the Pilots’ best finish in program history. She garnered All-WCC Honorable Mention for her 12th-place finish at the conference meet and also was a part of the top seven at nationals.

Solof points to Weiler’s consistency as her biggest asset. Solof said that while Weiler is never going to blow you out of the water with her speed, she’ll rarely have a bad race.

“She’s kind of one of those quiet contributors who (is) just always there helping out the team,” Solof said. “But it’s nothing flashy and nothing where everybody’s going to go ‘Wow, this is an amazing race! Yeah, she won this big race!’ That’s probably not going to happen, but she’s going to be in there contributing to the varsity group.

Adjusting to life in the U.S. was difficult for Weiler. She was a math major in Hungary, so naturally, she pursued a master’s in engineering when she first arrived. But that’s a difficult degree to pursue, especially when you’re learning about complex subjects like computer science in a language that isn’t natural to you.

“My English wasn’t that good, so it was really hard at the beginning to speak in English all the time and to listen to my teachers for three hours,” Weiler said. “And the school was also really challenging.”

It was all difficult for Weiler. She felt like the new girl in more ways than one and struggled to make friends at first. Solof remembers her being shy when she first got here.

“I think when she first came she was pretty nervous, especially about her English and being able to talk to people and understand people,” Solof said. “And it’s hard. I don’t know if we had anyone else in the school from Hungary before Virag got here, so that’s always a little bit harder.”

Slowly but surely, Weiler adjusted. She switched from engineering to business. She became more confident with her English. She even wrote a blog so that her family could better understand what her life was like in the U.S.

“In the beginning, it was for me really hard to make friends, but then it just got easier after a while,” Weiler said. “I feel like my whole last year was really hard at school and running and just getting used to everything here, but now I feel like it’s much easier now that I’m not the new girl.”

After spending a year here, Weiler told Solof about a friend she had back home interested in running in the states. That friend was Pataki, who was a faithful reader of Weiler’s blog. Pataki decided after reading her blog that she wanted to go there and try this new opportunity.

Pataki finds herself in a similar situation to Weiler now, adjusting to a place she’s never been, balancing school with running and doing it all in a language that isn’t native to her.

“I’m trying to adjust to this community,” Pataki said. “It was really hard and difficult for me with the language and a lot of new people who maybe know each other but I don't know.”

Both Pataki and Weiler have high expectations for themselves. One of their goals for this year is to continue adjusting to the training. Weiler talked about how she would be running between 60 to 70 miles a week back in Hungary, but now the expectation is around 75 miles along with core and weight training.

“They didn’t really care about core training or base training or strength training,” Weiler said of her old club.

Weiler may have been in the top seven, and Solof points to her as a big reason they finished second at the WCCs last fall, but she still feels there’s room for improvement.

Pataki has been adapting to the training as well, but she feels she’s in the best shape of her career. For now, her goal is to just do the best she can and see where that leads the team. She’s been doing well with that so far, recently finishing first on the team with an 11th place finish at the WCC Championships. Weiler finished fifth on the team and 24th overall.

Despite the difficulties adjusting, there’s a lot they like about the U.S., such as the openness and kindness of strangers. Weiler recalls how strange it was when she was with the team traveling to have random people show genuine interest in her and the group. She said that kindness extends to everyday situations.

“One day, I was walking on campus and a girl was like ‘Oh my god, I really like your shirt!’ and I was surprised because in Hungary people don’t really care about others,” Pataki said. “But this girl was so kind.”

The kindness of others had a positive effect on Weiler specifically. The quiet girl adjusting to a new place doesn’t feel the same kind of fear and dread that she had before. She feels more open to people, something that she didn’t feel in Hungary.

“I have never had a conversation with a stranger before but when I went home after studying here, sometimes I was just like ‘Oh yeah, I want to ask something from this guy or girl,’ and then I just when to him or her and I had a conversation,” Weiler said. “It was just so nice to talk to strangers.”

They both still miss home, but it’s not something they’re thinking about all the time, mostly because they don’t have time. Usually, they’re either running with the team or working on homework. But no two days are the same, and on days like Saturday when there’s no team practice and there might not be a lot of homework, there can be almost too much time to think.

It helps to have teammates that can get you through it. With plenty of international students on the team, they both feel like there are people who understand what they go through.

“International students can understand each other,” Weiler said. “Especially before midterms and before finals week we have more problems than just we miss home a lot. It’s good to go to another girl who also has the same problems.”

Back in Hungary, running is done through clubs, and it felt more individual to both Weiler and Pataki. It’s not the same as the team-driven experience they’ve had in Portland. That team experience has been largely positive, and Weiler felt like she was finally part of a team last fall with the trip to Nationals. 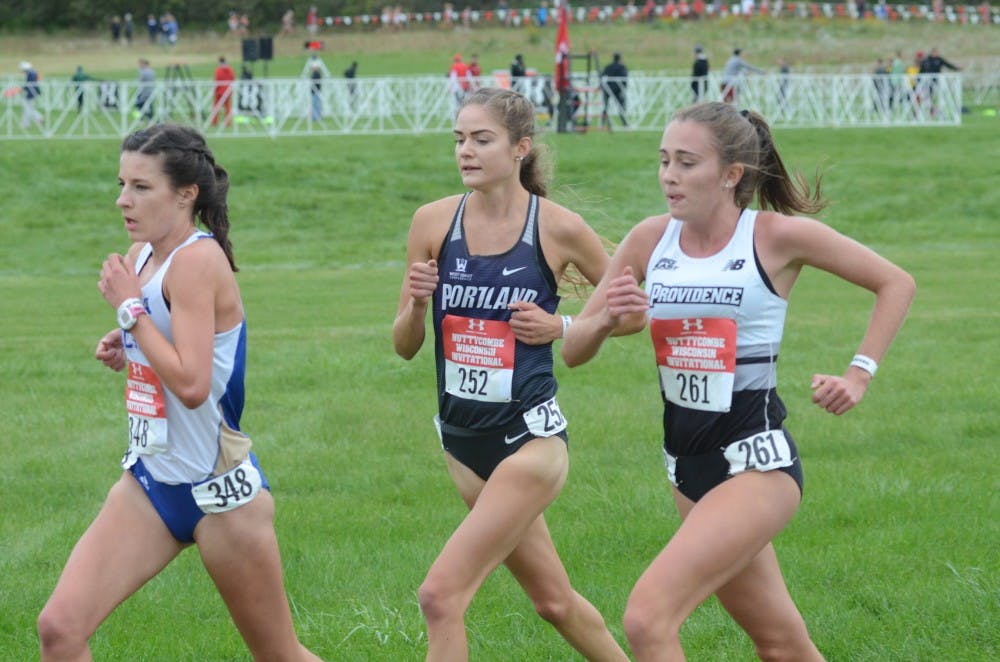